On Saturday, the founder of the company I work for invited the whole office and our significant others over for a great evening with some fantastic food.

In the middle of my bolus for my fajita the pod, that  I’d placed only a few hours before leaving for the cookout,  alarmed with an occlusion. I sighed, grabbed my spare pod from my purse and went to the bathroom to activate the new pod. Halfway through priming, the bathroom was filled with screaming… from the pod, not me. (But I was close.)

Plan A was the newly place pod functioning as it should and not needing to think about diabetes much. Plan B was the back up pod that I keep in my purse. Thankfully I have a plan C… although not ideal. Plan C is the orange-capped syringe in my diabetes bag. Not sure how much insulin I got in my failed bolus and SWAG-ing my food for the evening I drew up a completely arbitrary amount of insulin and took the shot. 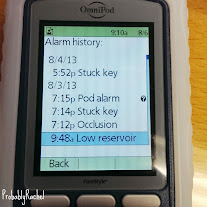 Saturday night, I was incredibly thankful to have the Dexcom back. The realtime monitoring made it possible for me to enjoy the next three hours of good company. I had no basal insulin and was relying on the fast-acting bolus with the option of taking another shot should I need it. I didn’t. When I arrived home a fingerstick showed me at 98.

Two pods failing while I was away from home and trying to enjoy my time made me so mad. There was the chance that we would need to end our evening early just so that I could get my basal insulin again.

I’m still angry because in the past three or so months, my OmniPod failure rate has been RIDICULOUS… as in 30% of them fail ridiculous.

I’m still stuck on the old system and am waiting on my update to the new one. I got a reorder notice from my medical supply company. I have to order the new pods and have yet to get notified about upgrading by OmniPod. Obviously I have to get the  PDM so I’m a little worried about calling to get replacements and letting them know that I need a new PDM because I’ll need to use up the old pods before even thinking about starting up the new ones.

I’m pretty fed up with the failure rates and seriously hope that the new ones are manufactured better and fail less frequently. I can say that if I experience the same issues with the new system as well, I will start researching other insulin pumps. There may not be a competing tubeless pump out there, but there are definitely other options. A reliable tubed pump is preferable to an unreliable pod.

Wearing the pods is supposed to make diabetes a “smaller part “of my life, but on Saturday, it stole the majority of attention and was anything but small to me.