One October night in 2006, Brad and I were driving in my car after a lovely evening. I wasn’t quite sure what to call him. He was this guy who I had gone on a few dates with, I’d met his parents and he’d met mine and the little rose plant he’d given me for Sweetest Day was already dying from the cold seeping through my bedroom window. So I asked him.

It was a beat-around-the-bush sort of question to which he gave me what I’ve learned to be a Brad-style response: 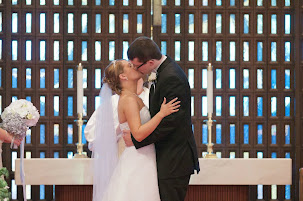 He became my boyfriend that night. And throughout the last five years he’s said some creative things as a boyfriend and then a fiance… but as a husband, he gets even better.

In our home we do not have a “garbage disposal”… we have an “insinkerator.”

He has a whole new set of opinions on food… and he shares them. Last night he said to me after eating a Ritz Bitz, “at first glance, they taste fine.” It’s like smelling colors at the K-couple home.

Stay tuned because my husband talks a lot and is bound to say more fun stuff.

2 thoughts on “Things My Husband Says”