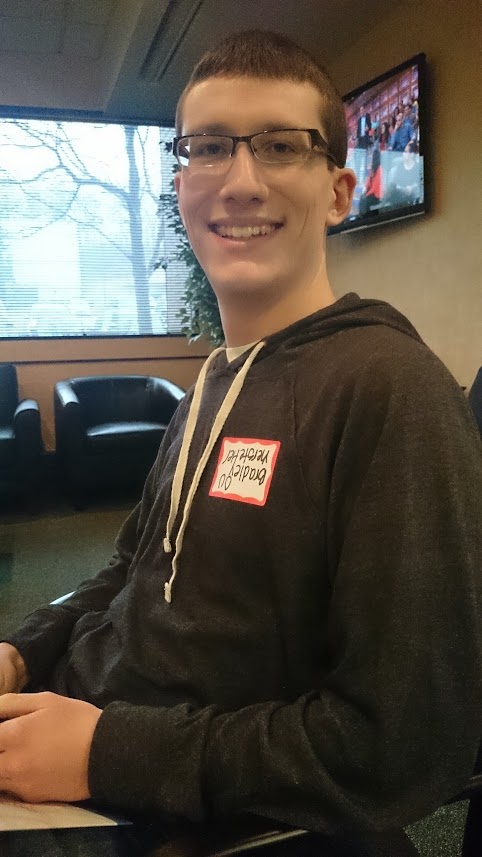 Our arrival time for the surgery was 10 a.m. on Friday. When we got there, Brad was given a name tag with letter abbreviations for the type of surgery and instructed to wear it upside down. I settled into the waiting room next to him with a cup of coffee, and took his last picture with glasses.

We were brought back to talk to the doctor, Brad was instructed to take one of the Valium tablets and they started surgery prep. Lasik is a quick outpatient operation and they let your driver (me!) stick with you through the process. 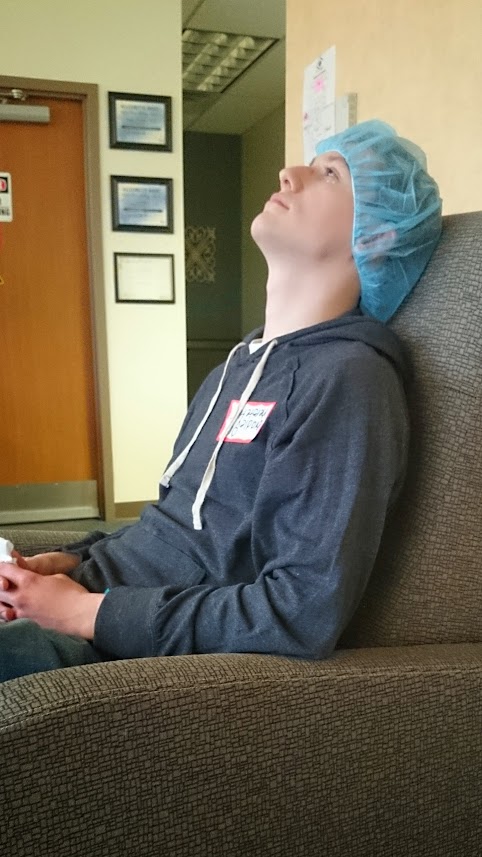 Surgery prep included a stylish cap that had to cover your ears to keep the variety of drops from running into them. They administered a variety or drops including antibiotic, anti-inflammatory and numbing to Brad’s eyes as well as cleaned the inside and outside of his eyelids and handed me his glasses.

Once he was taken into the glass operating room, they placed him on a swivel table and brought me around the corner to a window where I could watch. They put him under the first laser to cut a flap in each cornea, then re-positioned him under the second laser.

Shortly after they took Brad into the room, one of the staff members came over and asked if I’d like her to explain what what happening. She was great to talk with and answered my questions. They flipped the flap in his cornea to the side with a little metal tool that reminded me or something you’d see at the dentist and used the laser to burn off parts of the cornea and reshape it, correcting the vision. They replaced the flap with the tool, irrigated his eye and taped it shut. They repeated the process with the other eye.

The only part of watching the surgery that was a little uncomfortable to watch was when they flipped the cornea flap over. His total time in the operating room was about 8 minutes.

When they sat him up and let him open his eyes, a big smile spread across his face. For the first time in nearly 20 years, he could see without wearing glasses.

His first words to me when he met me outside the operating room were, “I can see you!” 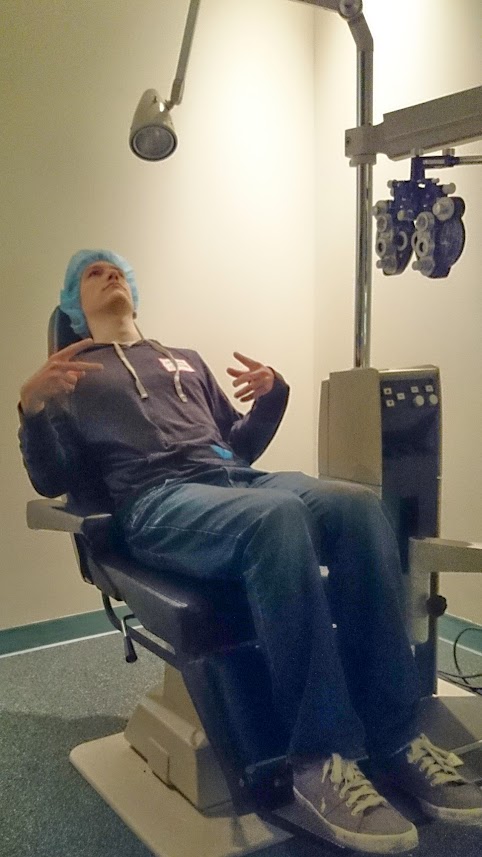 We were taken into an exam room where they administered more drops and actually tested his sight.

Then we were given care directions and sent home with the instructions for Brad to take about a 3-hour nap. He didn’t want to take the second Valium and wanted to eat first. So I took him home, prepared a quick lunch and sent him to bed so I could get some work done.

Unfortunately, he couldn’t sleep. The numbing drops had worn off and his eyes started bothering him. I told him to take the other Valium and he insisted that it wouldn’t help. Eventually I called the Lasik center and spoke with the doctor. She told me to have him take the other Valium and a Tylenol if he felt his eyes hurt and stressed that it was important that he sleep.

The doctor explained that eyes that hurt and/or itch are a common problem for people who have trouble getting to sleep after the surgery. Based on this experience, we recommend taking the second Valium and going straight to bed.

He finally slept and I finally got work done. When he woke up from his nap, we administered his first round of drops and actually went out for burgers at B-Spot with a couple of my family members who were in town for the evening. 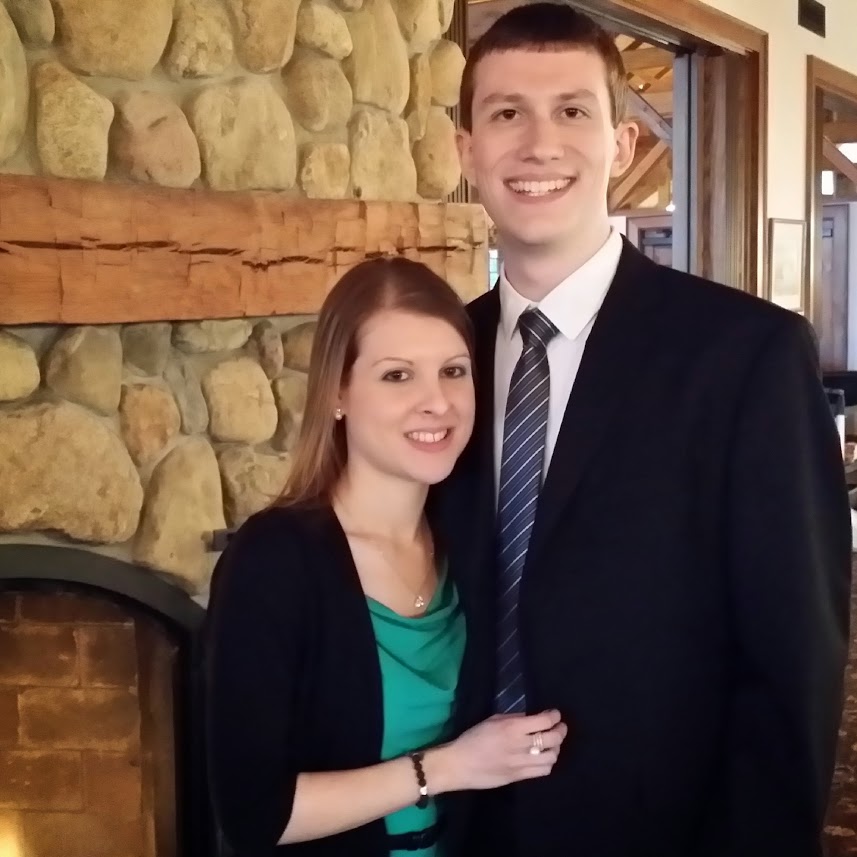 Looking classy at the wedding

The next day, he drove us to his 24-hour (more like 21 hours) follow up, where they tested his vision and he could read the 20/20 line. We then had some breakfast and he drove us to Pittsburgh for a wedding.

He has since had his one-week and one-month follow up appointment and checked out doing well.

Restrictions and After Care

For about a week or so after Lasik, he had to wear a mask to sleep in to prevent rubbing his eyes, he was not allowed to rub his eyes either. He had to take anti-inflammatory and antibiotic drops about 4 times a day and lubricating drops every two hours or more as needed. He also wasn’t allowed to lift anything heavy (more than 15 pounds) for a couple of days to reduce the risk of strain and/or squinting. Of course two days after his surgery, I needed to buy 20 pounds of potting soil so I did all the heavy lifting. I got to be the muscle in our relationship for once!

Although he occasionally uses lubricating drops, we’re back to normal, but are very protective of Brad’s eyes. He wears sun glasses or safety glasses when doing yard work or cooking any food that spits (think frying bacon, browning ground beef or sauteing anything). As long as he completes all of his follow ups and continues annual eye exams with an approved optometrist, they will do free touch ups for life as it is possible for his eye to heal back some of the thickness.

He did sign paperwork acknowledging  that around 40 we know that eyes weaken and reading glasses might become necessary. This isn’t part of regular vision problems, this is a part of regular aging.

Having Lasik done has truly changed his life and the people at Lasik Vision Centers of Cleveland were great to work with, we had endless questions that they answered for us and they were really great working with Brad’s aversion to everything medical and things touching his eyes.

I know this post was promised to you a long time ago! I hope those of you who were looking forward to it hadn’t lost hope! As you can see there was a lot to say.

Questions about our experience? Ask away!

8 thoughts on “His Eyes”