First let me assure you that I am okay! I’ve had a very interested couple of weeks and subscribe to the concept of “Live first, Blog second.” Which means at times I end up posting sporadically and now I’d like to catch you all up. 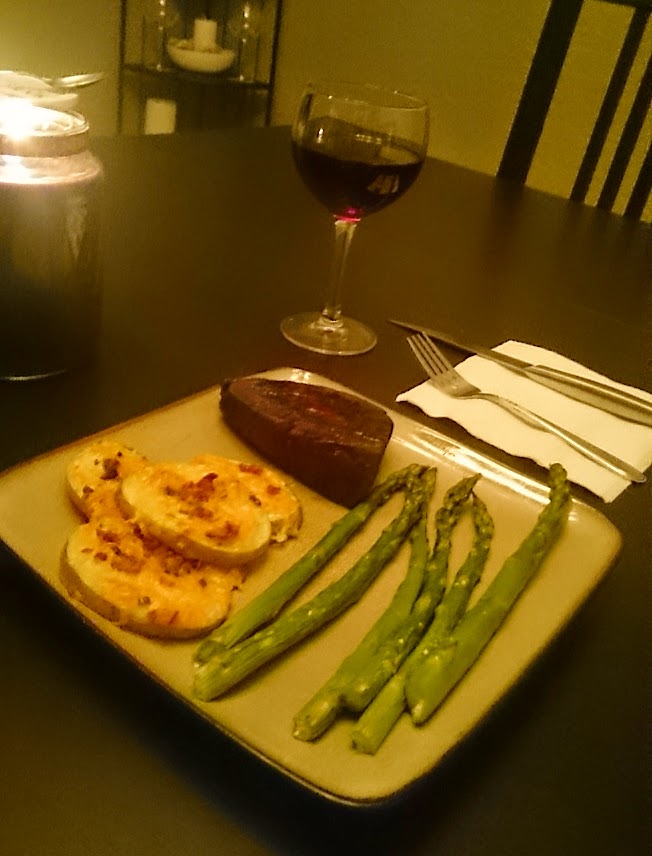 Brad took me to lunch on Friday since I had the day off. We went to one of the places near his office that he loves, but is only open for lunch on the week days. It was delicious, but I will save that review for later. I took the rest of the day to run some errands, including a thrift store stop to get two new items to refashion.

The rest of the weekend we opted not the leave the house. It snowed a lot and was cold, so why go outside when you can snuggle up with your Valentine and furry critters? We made filet, roasted asparagus and potato rounds for a special Valentine’s dinner, with Oreo truffles for dessert.

Monday was the official first day in our downtown office. The new suite is nice, but a major adjustment. I’m readjusting to the drive downtown and have been pleasantly surprised at how quickly I get home in the evening. (I used to work at an internship downtown when I was in college.)

Right now we don’t have a fridge in the kitchen, it’s being delivered Monday, so the team has been doing a little Cleveland lunch tour, which will contribute to a lunch-specific review post at some point soon.

I recently started making chili, finally giving into Brad’s requests. I don’t like onions and I hated every chili I tried as a kid so I never made it. I’ve ended up with a Pinterest-inspired, personalized recipe for turkey and black bean chili (stove top and slow cooker versions) would anyone be interested in reading it?

Also, it’s freezing and layers have been key to staying sane with these temperatures. Would anyone be interested in layering tips?

What do you have on tap for the weekend?

One thought on “A little Thursday catch up”