A friend and I were talking and she said eventually she’s going to need to replace her car, which made her a bit sad since she’s still driving her first car.

I don’t know a single adult with a driver’s license who can’t tell you the year, make, model, color and quirks of his/her first car. And they’ll recount driving adventures from when they were young.

I’m still young and I do that! I’m 22 and bought my very first car when I was 16, all on my own. I’m now on my 5th car and have named all of them but the one I’m driving now. The only one that really stuck though was the first, he was named Sputter. 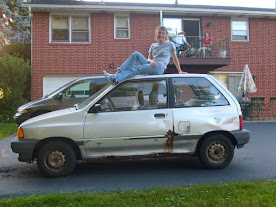 Sputter was a 1990 Ford Festiva that was a silver and rust mixture. He was a 5-speed, stick shift that was manufactured without a passenger side rear view mirror. And his “trunk” was the perfect shape for extemp bins.

I sold Sputter the summer after high school graduation to a man who ran in demolition derbies. Sputter took 5th place in his first derby and 3rd place in his second and last derby.

What was your first set of wheels?

6 thoughts on “You Never Forget Your First…”