…in more ways that one.

I’m still getting back into “real life” after vacation and I had a post drafted up for yesterday about how diabetes behaved during our trip. Then I realized that October 1st was No D-Day! So I planned to postpone that post and to enjoy a day meant to put D on the back burner.

I tried and failed to make diabetes as small of a part of the day as possible. I wasn’t the only one failing… so  were my pods.

After arriving home on Sunday evening, I replaced my pod and lived happily for a day and a half. I bolused for lunch yesterday and my pod clicked away, beeped to confirm it was done. Less than an hour later it started squealing. Fun. It took longer to silence the errant pod thanks to the confirmation screen and whatever processing screen that was. I’m sure my office neighbors were thrilled.

I called up customer support… I’m sure they missed my weekly phone calls since I got switched. I was warned of wait times by the automated message then got to speak directly to a rep. They must have known I had work to get back to. The woman I spoke with was nice and went through the questions. She discovered that they still owed me pods from the summer (I had written them off after multiple conversations regarding replacing them, then getting the new system so we’ll see). I get to wait 3-4 weeks for them, but that should be okay. I was asked to send my failed pod back so the engineering department can look at it. [Maybe they’ll see 50+ units of insulin in it and realize how much failed pods waste!] My bg trended high following so I question whether I actually received my lunch bolus or if my body just hates me.

If that were the extent of it… I’d say, “Okay, diabetes played a bit of a bigger role that I’d expected but I can deal with it.” It wasn’t the extent of it. When bolusing for a snack at 9:40 (just more than 9 hours after placing a new pod) that pod failed as well… and I got to call Insulet again, increasing the total of pods I need to receive in a few weeks and the number of pods they’ll be getting back from me (along with more than 100 units of insulin). 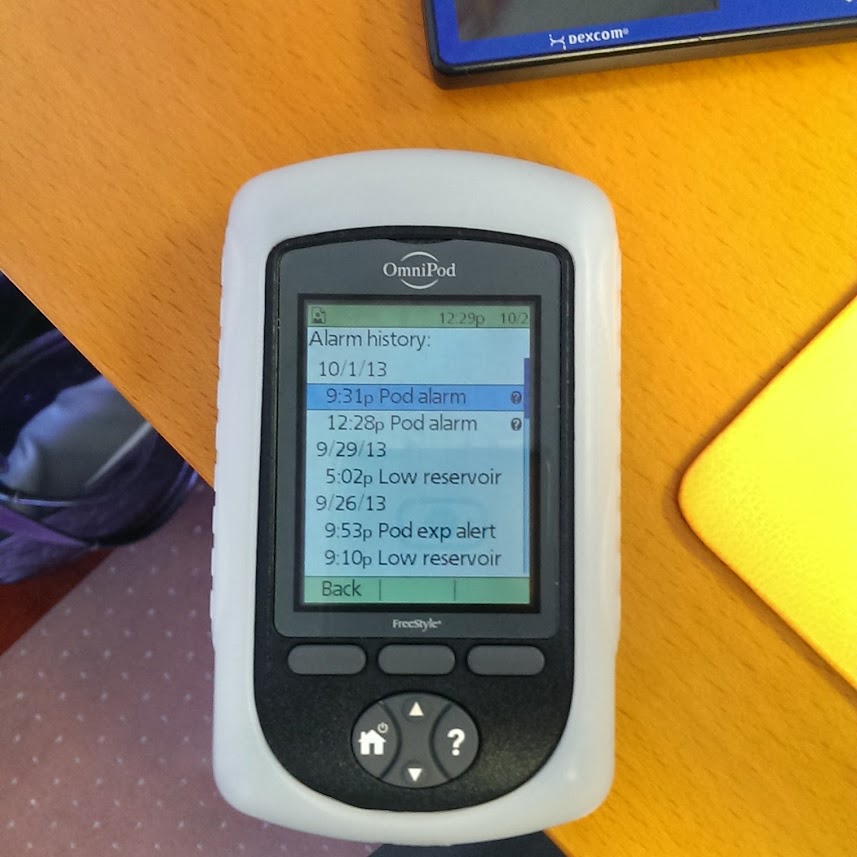 Adding insult to injury, Edgepark left me a message about a balance on my account. Seeing as how I paid at the time of order up until I hit my deductible in April, I shouldn’t have a balance. I logged into my account system to find bills for dates of service for March and June of 2012. That’s over a year ago! But my insurance’s first payment to them in April 2013 showed up, so now I’m confused. I think someone screwed up and put the wrong dates into the system or something. But I was covered by my previous insurance then. So I get to dig up all sorts of EOBs and bank records, because I know I don’t owe them money.

Finally…. it’s not directly diabetes related, but the hospital’s excellent billing staff struck again and screwed something up because they claim I owe them money as well… for preventative office visits from after my deductible was reached. They’ve done a bang up job of billing my old insurance in the past as well as billing for the wrong services (like saying I had physical therapy when I was in for an endo visit), so I get to talk with them as well.

This whole mess is exhausting. If I didn’t already want a cure badly enough due to actually living with type 1 diabetes, I need one just to stop dealing with all of the forms, red tape, wait times and frustration from the medical industry. The headaches will continue because we’re reviewing all of our insurance options with our employers due to changes.

Can I go back on vacation now?

One thought on “Tried and Failed”