Every time we bumped into each other, tripped over a cat or had nowhere to set something, Brad and I reminded each other: It’s temporary.

We moved from a 2-story, 3-bedroom house into a 600-square-foot apartment during the construction of our house. Brad started referring to it as a shoe box. It’s small and we got frustrated a lot, but it was temporary.

Maybe part of the problem was that we got what we got when it came to temporary housing. We are fortunate to have been able to take over the last 3 months of someone’s lease, while our house was being built. It worked out for him, because he could move out of state without buying out the rest of his own lease. Before we bought the Pelham house three years ago, we had a pretty big two-bed, two-bath apartment, with a balcony, quiet(ish) neighbors and a whole lot less stuff (including no cats), so we’ve been spoiled. 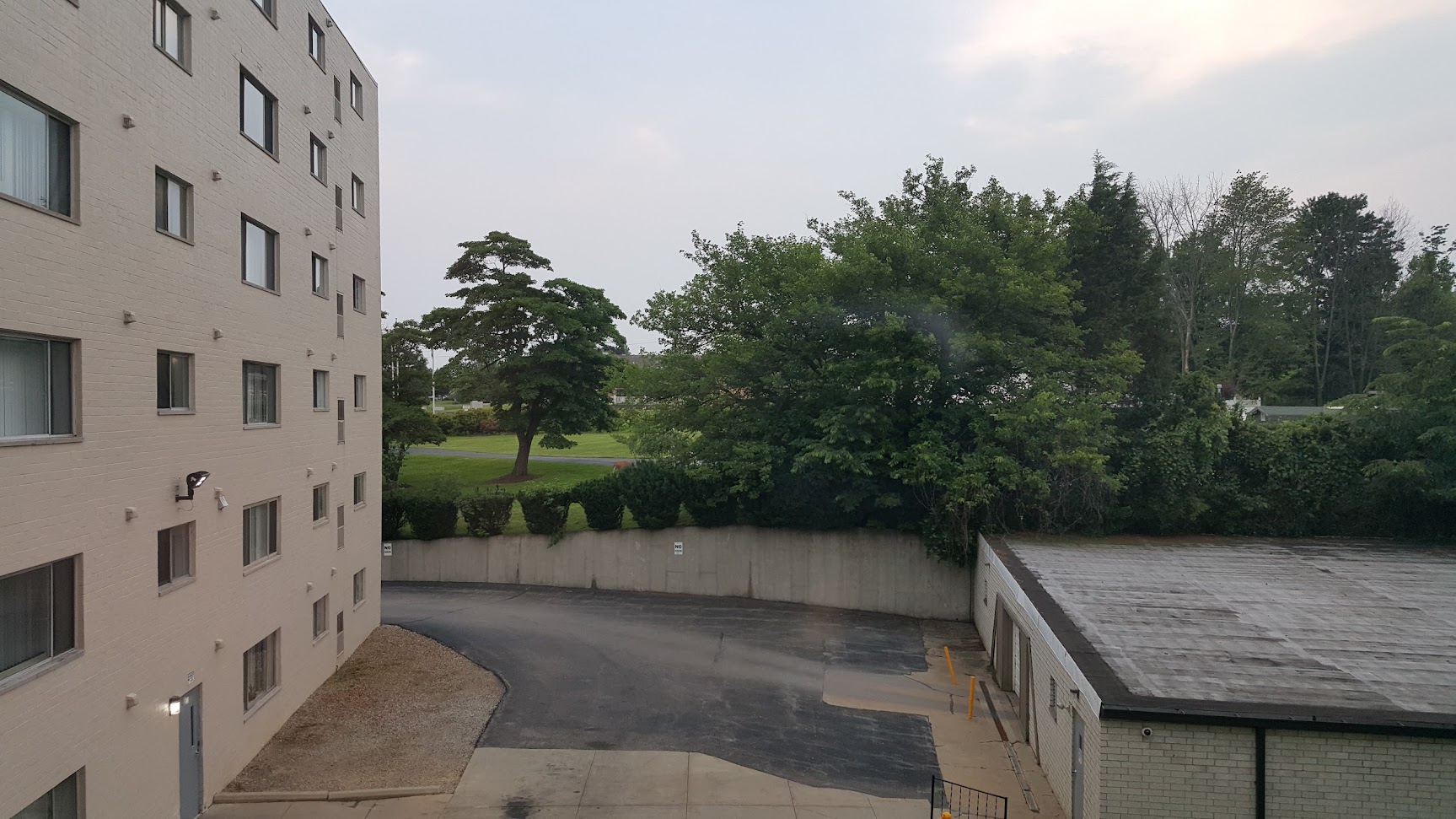 A shoe box with a view

I have to recognize the blessing of living close to work, close to our in-progress home and across the street from a good bar this summer. But there were definitely things I hated about our apartment, such as:

But here are the tales from the shoe box that make me glad we’re out of there.

There were two boys who lived down the hall in an apartment with a balcony near the building entrance. Clearly they didn’t have the proper activities lined up for the summer because they spent a lot of time on the balcony spitting at people walking in and out of the building. I started referring to them as “camel children.” Brad tried to handle the situation directly from ground to balcony, telling them to stop. They giggled and ran inside, as if we wouldn’t be able to figure out where they lived.

The next day, they were back at it, so we reported them to the office.

Our apartment hosted a boys’ night for the male children in the building, providing snacks and games and stating “No Girls Allowed.” There was never a girls’ night. That’s not okay. I feel bad for every little girl in the building who didn’t get a complex-sponsored girls’ night. 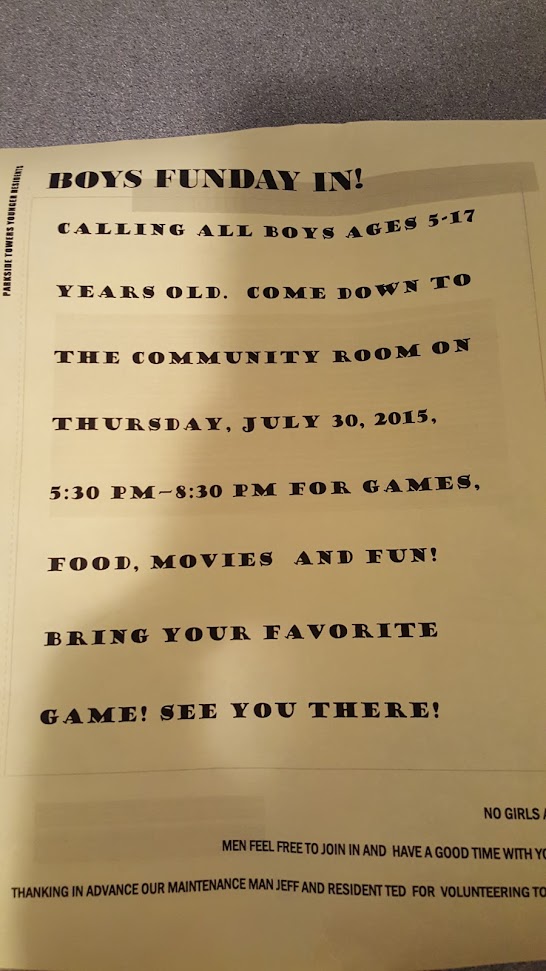 Cats and small dogs are permitted at the apartment complex, but barely. They wanted to charge us a whole new pet deposit for the 3 months leftover on the lease since we had “a cat” but the guy whose lease we were assuming, had already paid it for his cat. It’s a $400 deposit, plus $35 per month. Which, okay I get it. Not everyone has great cats like we do. But here’s the kicker, we had to say that our cat was declawed and submit a picture. 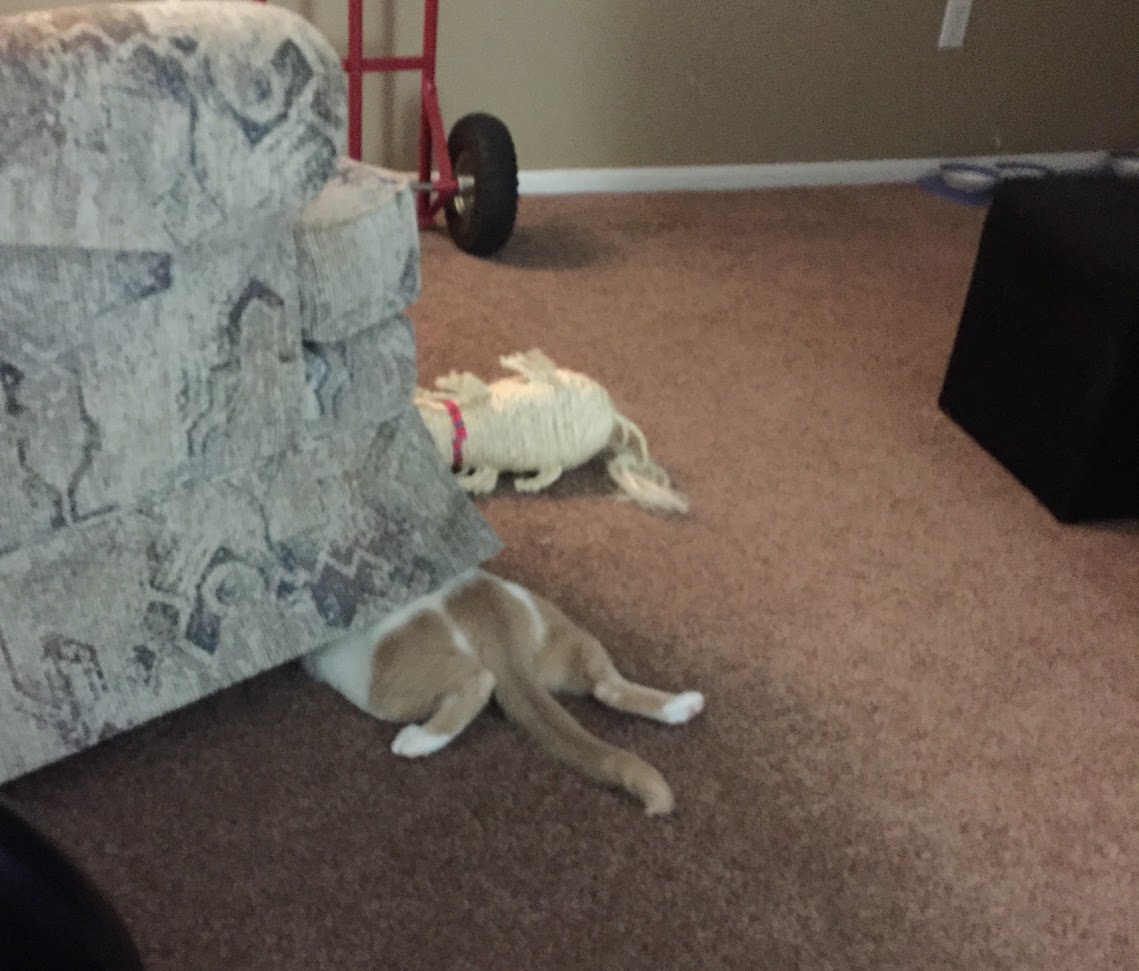 The apartment was scary for the cats

This is where I admit that we said we had one cat. We submitted a picture of Watson who would be less likely to hide if someone entered our apartment. And we said that our cats are declawed. I refuse to declaw a cat. Holmes and Watson have all of the clawing outlets they need with their scratching post and climber. They get their nails trimmed every week. A lot of people think that declawing just removes the nail (or claw), but it’s more than that. It’s actually an amputation of the end bone in each toe on the paw. Think about this: You’re sick of snagging your finger nails on things, so instead of keeping them trimmed or filed you have your finger tips completely removed to the first knuckle. That would be “declawing” a human.

They don’t charge a child fee, but I’m pretty sure the children in the building were more destructive than any animal could be.

I actually considered starting a series of posts called: Strange Things In the Dumpsters. Our apartment window looked over the eight dumpsters that serve the building. (Fantastic view, right?) A lot of strange things appeared in them, like a trippy picture of a cat in space… and it was huge. I should have taken a picture of it.

But honestly, that pales in comparison to the dumpster fire. We had the window open and had just finished dinner when I smelled cooking sausage or bacon wafting through the window. When I walked over to the window, I saw that one of the dumpsters was smoking. I called Brad over and we determined that someone must have dropped their charcoal ash in the dumpster. But then it started glowing orange.

As Brad dialed 911, we watched flames grow. Something very flammable caught and the flames were leaping out of the dumpster. The police arrived within a few minutes and the officers tried to put it out with little fire extinguishers. (No offense to them, but we could have done that.)

The fire continued to get worse, and we finally heard sirens. One of the officers pushed the flaming dumpster away from the others with his foot, but ended up pushing it toward the building. Because pushing a flaming metal bin toward 130 apartments is a good idea. The fire department arrived and hosed down the dumpster before anything else caught on fire. It appeared there was no damage. 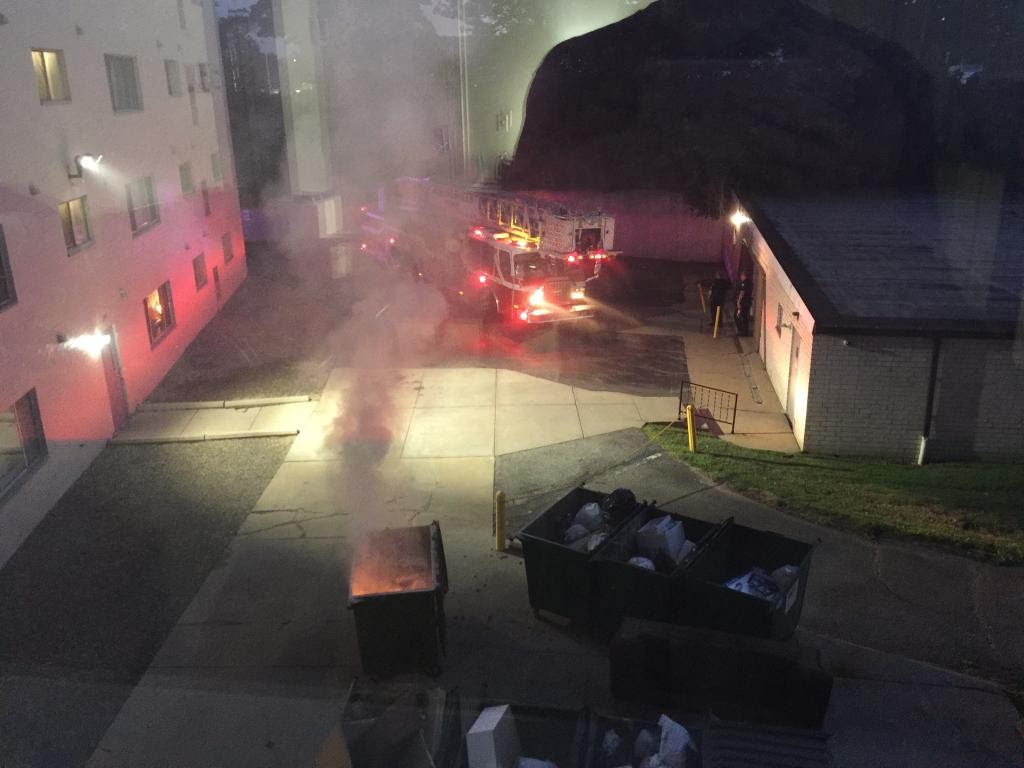 All in all, our shoebox was what we needed, but all of us (cats included) are happy to have a permanent home again and more room to coexist in.

Do you have any crazy apartment or tiny home living stories?

One thought on “Tales from the Shoe Box: Three Months in 600 Square Feet”