That title sounds scandalous, doesn’t it? Every word is true though.

During the last week of September we moved into the house on Friday and Saturday, tried to unpack as much as possible on Sunday and early Monday morning, I got on a plane to Las Vegas and stayed there for three days.

When I was originally scheduled to fly to Vegas for a trade show, we were expecting our house to be finished in October, so I would have been back in time to move. Instead the move happened directly before my trip. As you may have figured out already, I was in Vegas for work. I think if the timing with our house had worked out differently, Brad may have come out with me. Regardless, it was my first time in Las Vegas and it was interesting.

I go to industrial trade shows for my clients periodically and often travel alone, though I’ve had luck ending up on flights with clients, work partners or the media people the we work with, I don’t normally run into friends or family. When I checked in on Facebook at the airport, showing I was headed to Las Vegas, I said which trade show I’d be attending. When my flight landed, I had a message from Brad’s aunt (in Seattle) that Brad’s uncle was on his way to the same show and had just landed! Small world!

I was able to meet up with Brad’s uncle on the show floor and we managed to have lunch together (although with the timezone difference, I felt like I was eating dinner). We caught up on family stuff and talked shop over salads at Gordon Ramsey’s restaurant in Ceasar’s. I don’t get to talk about work often with family who understand it, so it was a cool experience. If I hadn’t posted on Facebook, we would have been in the same place at the same time and I promise we wouldn’t have run into each other by chance. (The Las Vegas Convention Center is huge!) 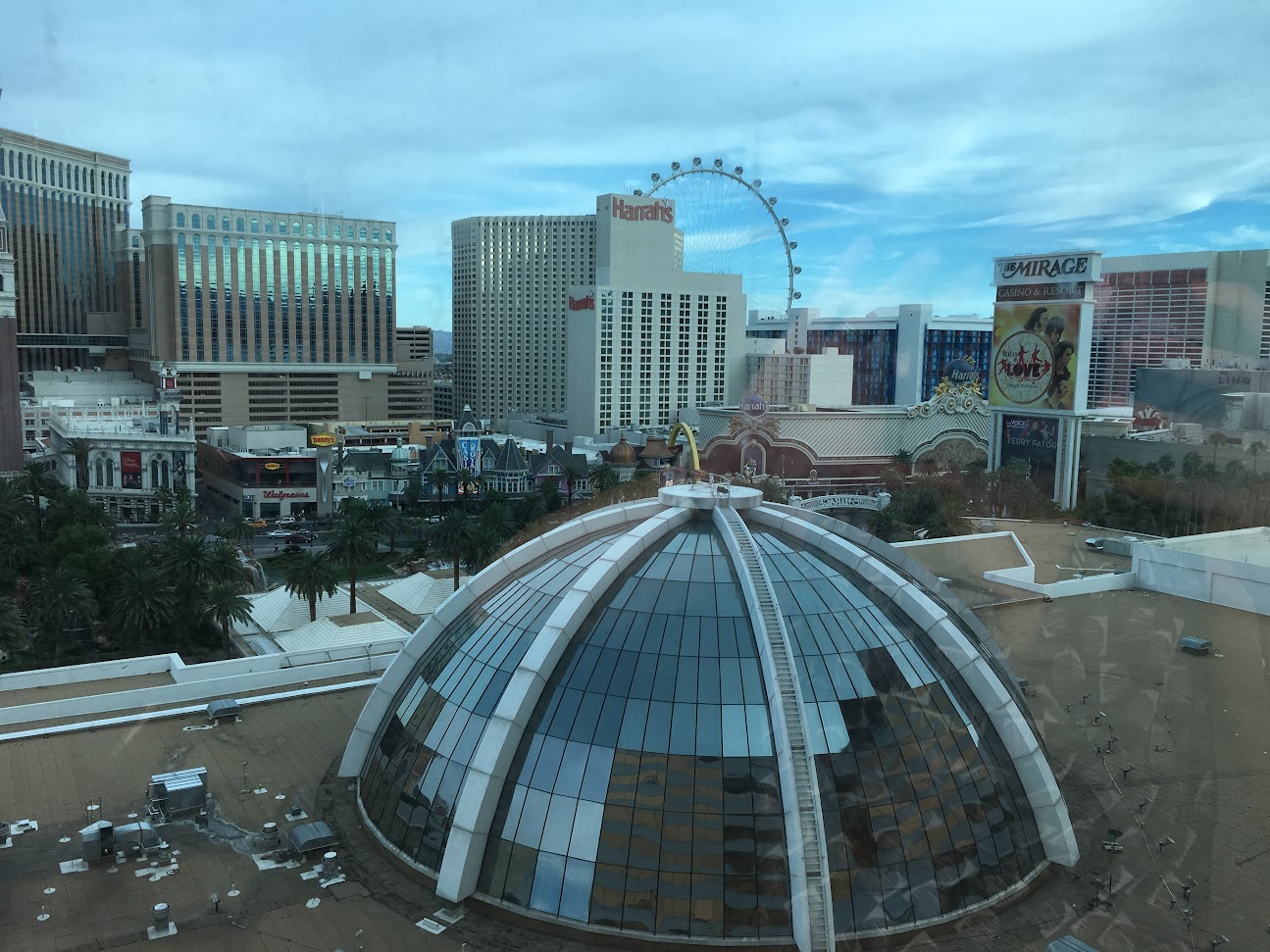 My room was at the Mirage with my client’s group. The accommodations were pretty nice and the view was okay. My major complaint was having to walk through the smokey casino to get to the elevators. Since I had gone from airport to trade show, to lunch, back to trade show, I was happy to be able to check into my room, change and catch up on email before meeting with my clients for dinner.

A group of 12 of us ventured out to Rolling Smoke, a BBQ place off of The Strip. To be honest, I got a little concerned when it looked like we were only surrounded by strip clubs and factories. Rolling Smoke is a smaller establishment that’s rumored to have the best BBQ in Las Vegas. I got a pulled pork sandwich and it was delicious, the whole group seemed happy with their meals. One of the pit masters came out to talk with us several times and told us that they’re opening a new location with two floors and several beers on tap (the current location was dry) which would be next to the shop where Pawn Stars is filmed. I can safely say that it was the best-priced food from my entire trip as well. 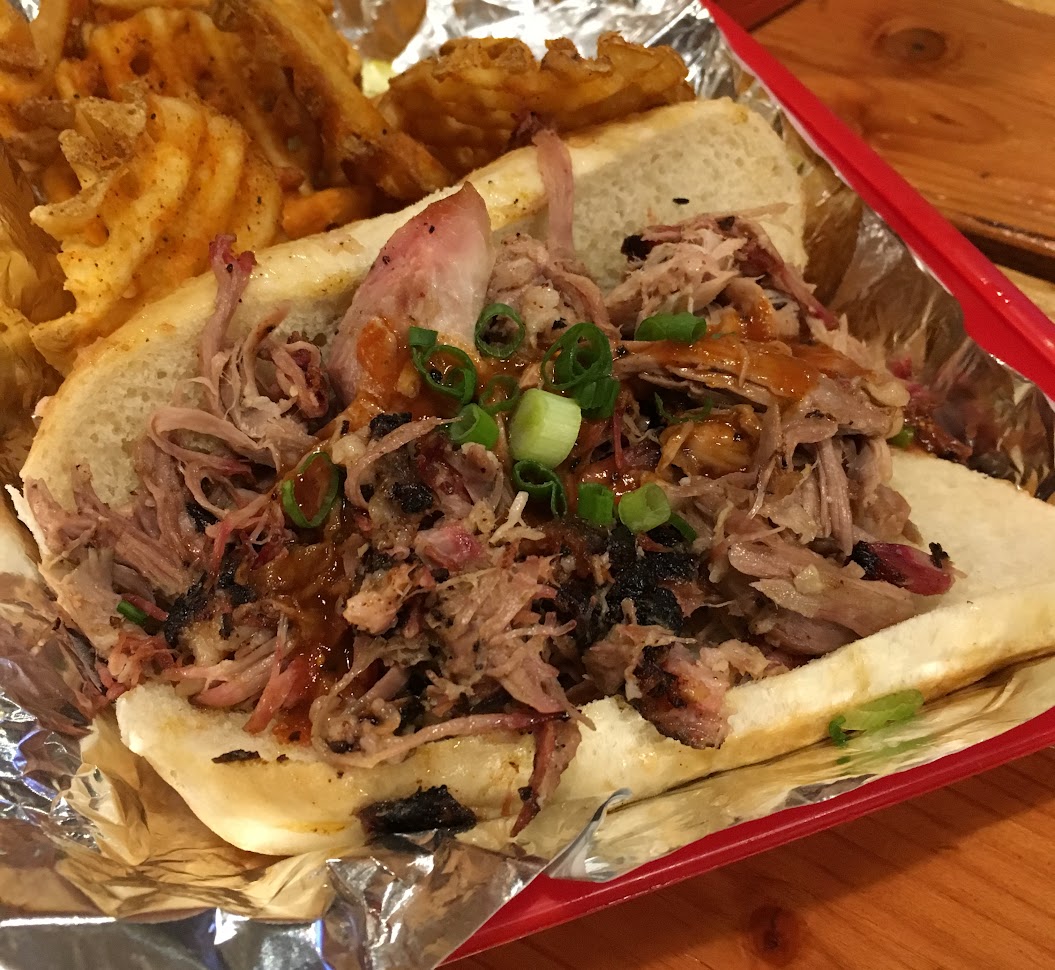 After dinner I was invited to do several activities including gambling at Ceasar’s, doing the High Roller Ferris Wheel or heading back to the Mirage for a drink and Black Jack. We ended up securing three Ubers and splitting up, I went back to the Mirage and called it a night, I’d been running for 21 hours by that point. If I hadn’t been so tired, I would have definitely been in for the High Roller.

The next morning I got work done in my hotel room until the show opened, then headed to Starbucks for my National Coffee Day fix and to round out my meetings. The Starbuck’s line was crazy long and when I got to the counter, the barista greeted me by name. The Starbuck’s guy knows my name. How? I thought. It wasn’t until I got my coffee and sat down that I realized I was wearing my exhibitor badge!

Getting my @starbucks on in Vegas on #NationalCoffeeDay at #PackExpo.

After my meetings, I got a personal walking tour of part of the Las Vegas Strip from one of my clients. 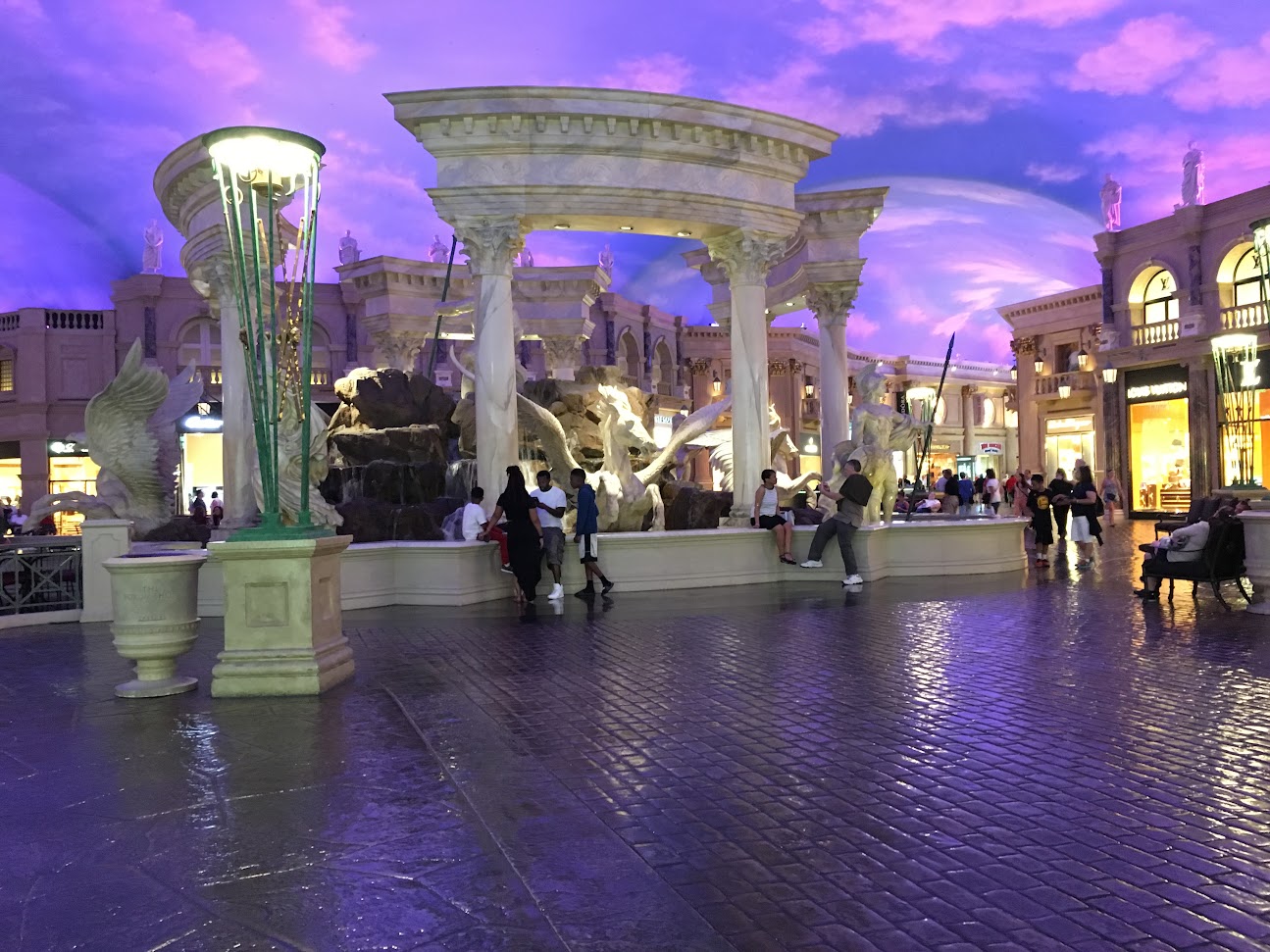 We walked through the mall at Ceasar’s and watched some of the fountain show, which was a little corny. We cut through casinos, walking through places I recall seeing in shows and movies, like the Bellagio, Paris and Planet Hollywood. We had lunch at Mon Ami Gabi at Paris, which faced the Bellagio fountains and had excellent food. 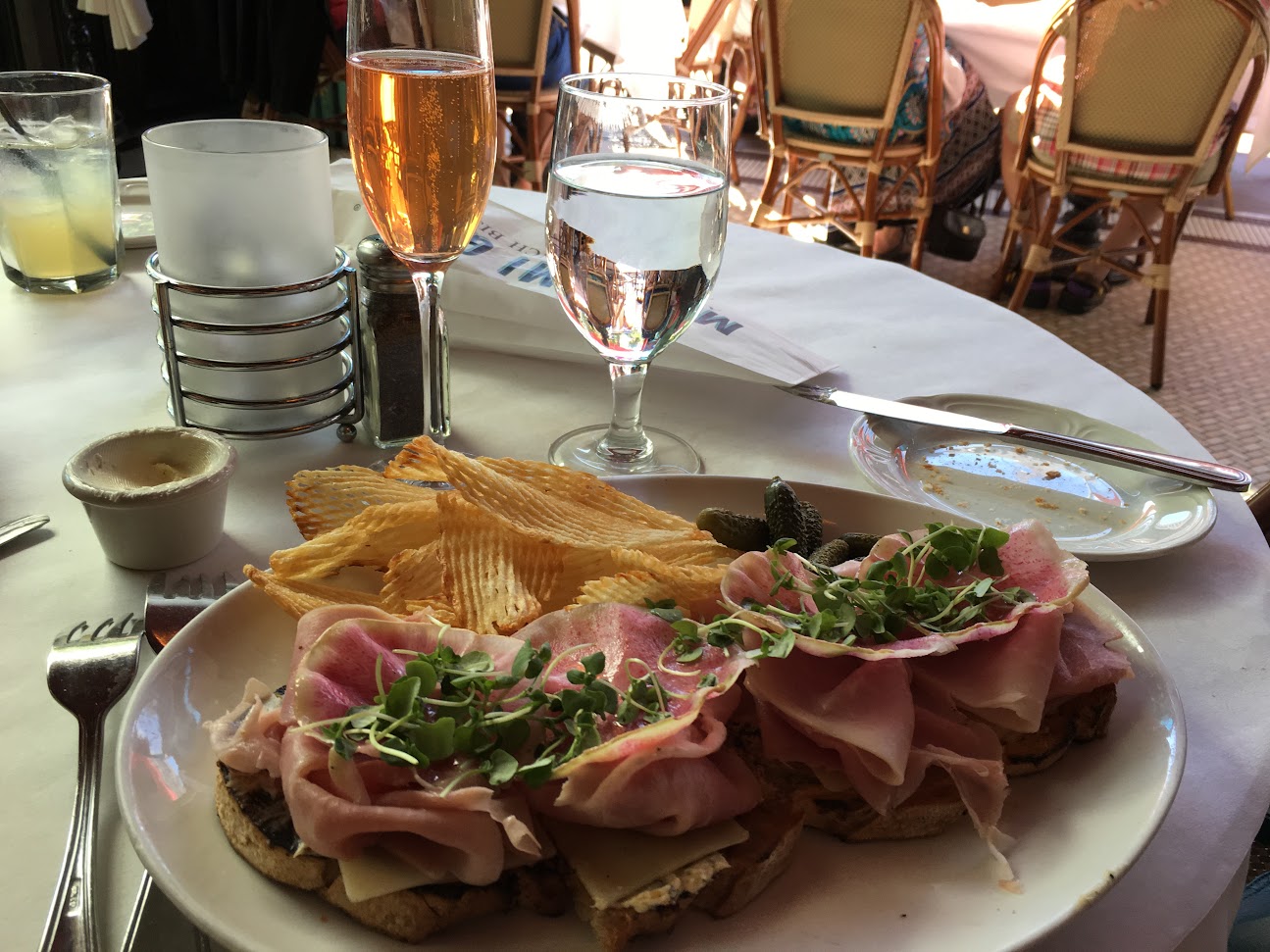 Later that evening, Ubered over to a a dinner hosted by a media group at Planet Hollywood. My driver was actually a comedian and had performed in Cleveland a few times. The dinner was a fun event, following dinner we walked over to the Mandarin Oriental for a drink. The lounge, located on the 23rd floor offered a great nighttime view of The Strip that doesn’t come through in photos. 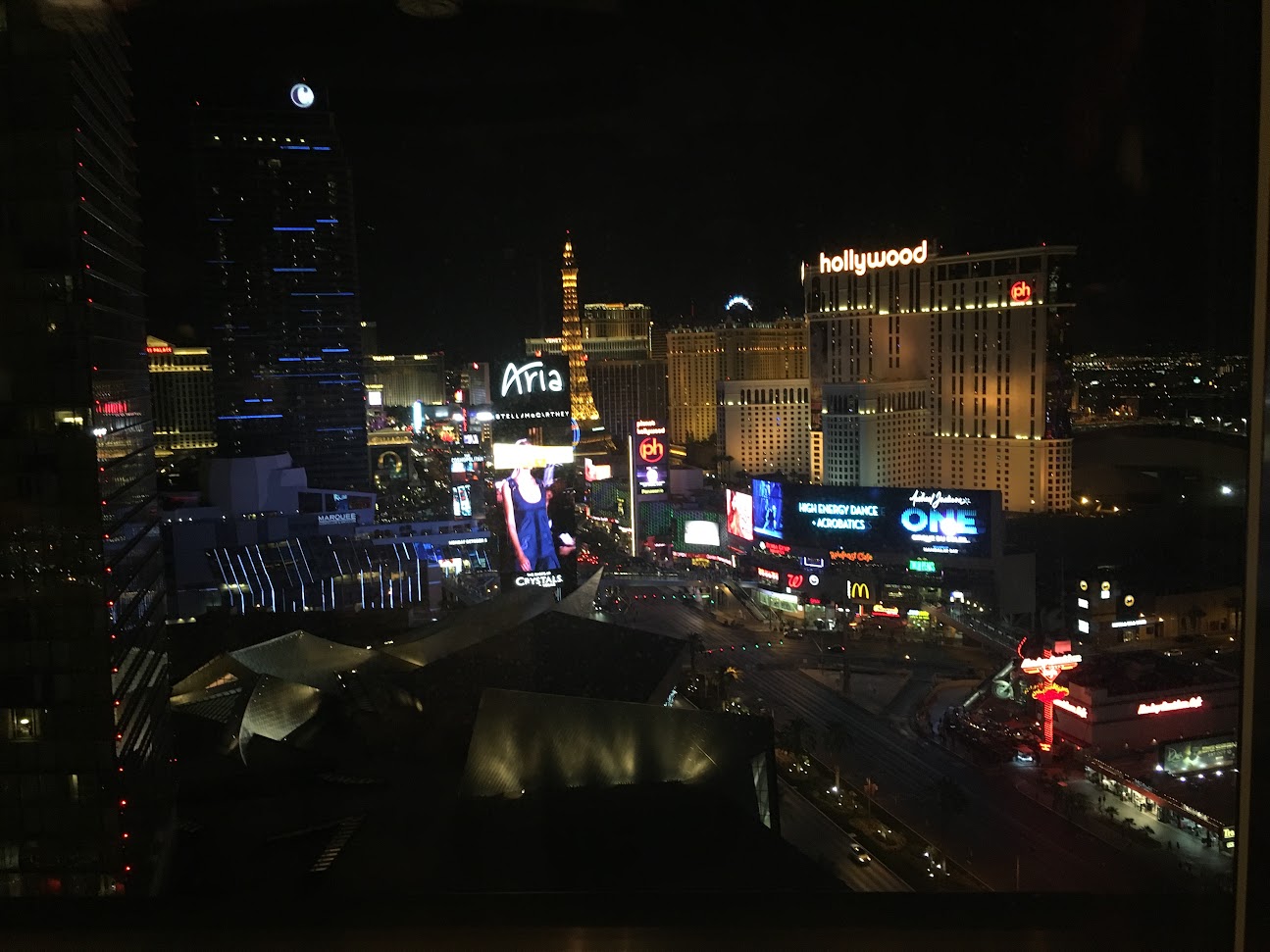 Doesn’t do it justice

I got an Uber back to The Mirage with a brand new driver who actually drove limos for a living and owns a wedding chapel, I got the private car experience. I started using Uber on a business trip a couple of years ago and have had several rides. I’ve really only had a couple of rides that weren’t positive, with drivers who weren’t personable or didn’t have terribly pleasant cars. If you’re interesting in trying it, you can get your first ride up to $20 for free with this code: 5bw0x (If you use my code for a free ride, I also get a free ride.)

The next morning I was able to get a real breakfast at the Pantry, the eggs Benedict were incredible. Then I headed to the airport to spend the day traveling home. When my flight took off, Vegas was 104 degrees, it was 52 in Cleveland.

After a long day of traveling yesterday, I came home to this. My husband is wonderful. A photo posted by Rachel K (@probablyrachel) on Oct 1, 2015 at 5:04pm PDT

I was in the gambling capital of the world for nearly three days and didn’t gamble a single penny. It seems like there’s a lot to do in Vegas that isn’t gambling, and I didn’t even get to really do the tourist thing. There are beautiful pools, loads of shows and other interesting activities like zip lines, Ferris wheels and more. Apparently my hotel had a dolphin habitat that I didn’t have the chance to discover.

Have you ever been to Las Vegas? What places/things do you recommend?

As they say, what happens in Vegas ends up on a blog!