For our third wedding anniversary over Memorial Day weekend, Brad and I wanted to take a little trip. We started looking for destinations that weren’t terribly far or expensive but would still be fun.

Like magic, a Groupon Getaways email landed in my inbox. 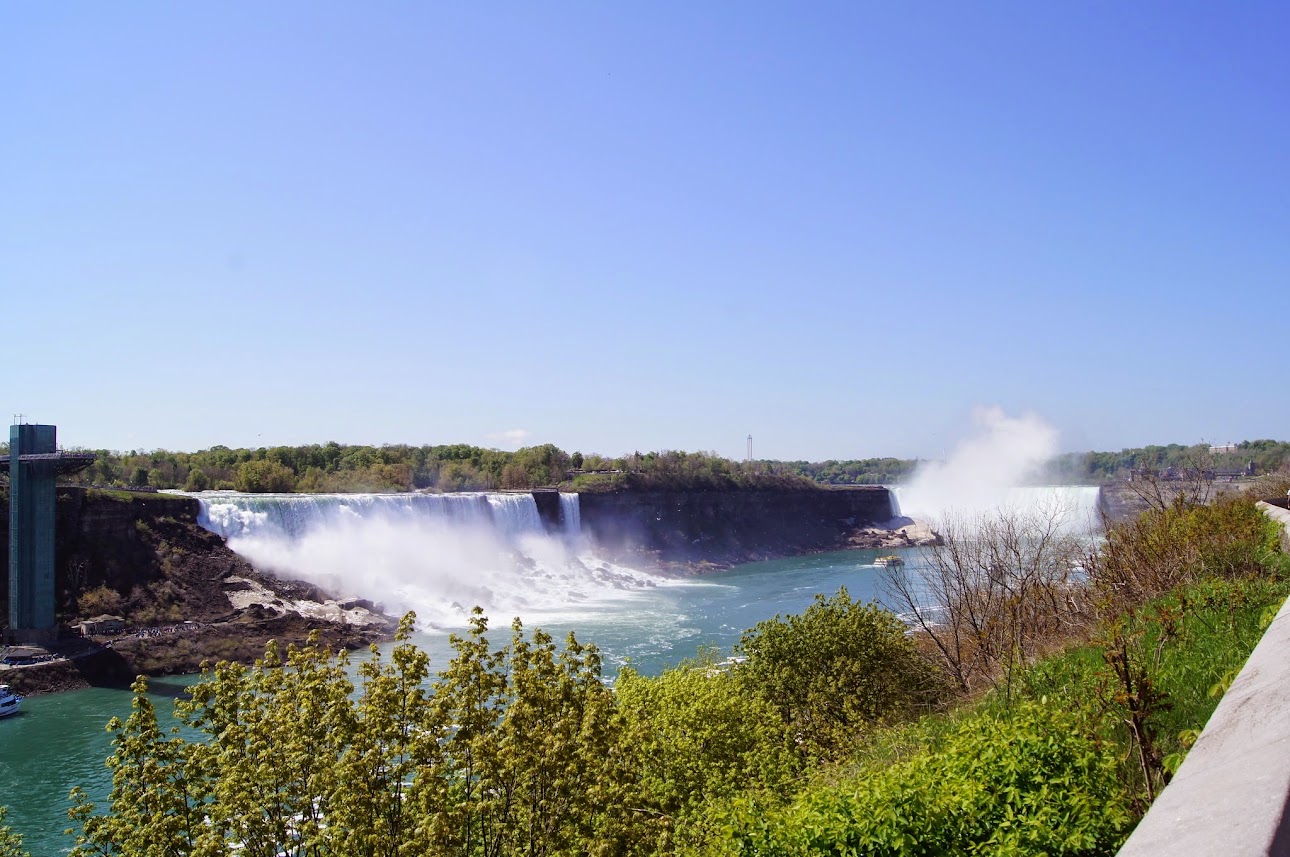 “How about Niagara Falls?’ I asked Brad.

So off to Niagara Falls we went.

We both took Friday off of work and slept in a little. We enjoyed a leisurely breakfast at home before packing our bags and hitting the highway. The drive to Niagara Falls, New York is under four hours.

The drive was pleasant, although slightly overcast and we avoided work traffic at Buffalo, arriving at the Sheraton

at the Falls shortly after check-in time began. There was a bit of an issue with our booking, apparently Groupon’s computers and the Sheraton’s computers disagreed on the number of nights we should stay, but the problem was quickly fixed with a look at my confirmation email and we settled into our room.

Honestly, the only issue with the entire trip was the room which we both categorized as “okay.” At first glance everything looked great, but deeper inspection showed thing that were well-worn or lower quality than expected… and there was a giant cobweb in the corner. We’ve stayed in much, much worse accommodations before, but we’ve also stayed in better. 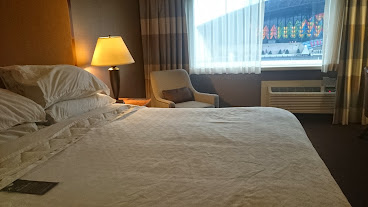 Here’s the room and bathroom at the hotel. The bathroom mirror was pretty cool.

We decided to walk to dinner and picked a highly rated restaurant consulting with both FourSquare and Yelp! reviews and the online menu. Friday evening was a little misty and the streets were not the least bit busy, so we had a quiet walk to Wine on 3rd.

Wine on 3rd is a cute wine bar that got rave online reviews. We were promptly greeted by a bartender who pointed out our seating options (a couple of areas at the bar or open tables toward the back). We opted for a table  for two at the back of the bar and were greeted by our server and provided with menus promptly.

We each ordered a glass of wine and a cheese plate to start then perused the menu. I ordered the “Red Zepplin” which was a delicious and sweet red wine. Brad ordered a slightly dryer red wine called “Lord of the Manor.” They were both good and the cheese plate was amazing, with a variety of cheeses, meat, olives, small pieces of toasted bread and figs. 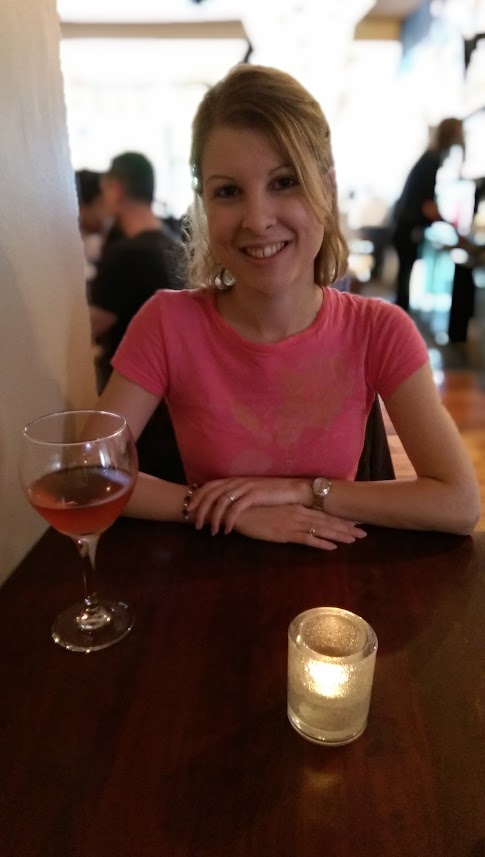 I match my beverage!

We decided to split one of the specials after consulting with our server on the size of the entree. When the sandwich arrived, we determined that splitting it was a great idea. I can best describe it as a steak sandwich, with great seasoning, cheese and sauce. It went well with the wine.

The meal prior to splitting it

After dinner, we took our hotel voucher down the street to Seneca Niagara Casino and signed up for their player program (required to actually gamble there). The casino was nice but I honestly prefer the environment of our own Cleveland Horseshoe largely due to the fact that it’s smoke-free. But we found the non-smoking section of the casino and picked out slot machines one which to use our promotional credit. Between the hotel and the signing credits, we each had $35 of free money to play with on the slots. Once the promotion credits were gone an hour or so later, we cashed out and left with winnings totaling $54.91. Not a single cent of our own money went into the machines.

We left the casino and took a quiet stroll around the Old Falls area before heading back to the hotel to end our evening with a glass of our own Twisted River Riesling and plan for the next day.

The Sheraton’s hotel restaurant is actually a TGI Friday’s, that our package provided a $20 voucher to each day. Because of opting for the hotel’s “Green” program (more along the lines of “let’s save on housekeeping” program), we got an additional $5 food voucher to use at either Friday’s or Starbucks. We took both vouchers down to Friday’s for breakfast and took advantage of the breakfast buffet, before heading out of the day.

Our goal was to walk across the Rainbow Bridge over to Niagara Falls, Ontario. We were successful, but delayed due to the fact that most of the U.S.-side of the falls seems to be under construction. We finally found the entrance to the place where you walk across the bridge… although we felt like we should have had hard hats to get there!

Body in Canada… hand in the U.S.

This is how to be in two places at once.

I will never drive across the bridge to visit Canada if I don’t have to ever again! Walking was so much quicker and was a lot of fun! The guy behind us at the border booth actually explained, “I’m meeting my wife. She’s in our car on the bridge. I realized that I forgot my passport at the hotel right before we got on the bridge, so I got out and went back to the hotel to get it then just walked across. She’s still waiting in traffic on the bridge.”

We walked along the railing, enjoying the view of the falls and the blooming tulips. Then we crossed the street and walked back the other way enjoying more of the “park.” We then wandered around Clifton Hill, had lunch, stopped by the Hershey’s Store

(because, why not?) enjoyed a fudge sample and went to walk back across the bridge. The shop clerk at the Duty Free store, walked us to the bridge entrance and pointed out where there was still ice on the rocks near the falls, before wishing us a good day. Getting back into the U.S. was about as easy as getting out. Simple questions and a show of our passports and we were wished a nice day and welcomed back.

Since it was mid afternoon, we made a pit stop at our room to refresh and were planning to drive over to Goat Island, because although I’d seen the Canadian side as a child, I had never been on the U.S.-side of the falls. unfortunately, they were not allowing auto access… so again, we walked. Although under construction it was beautiful. 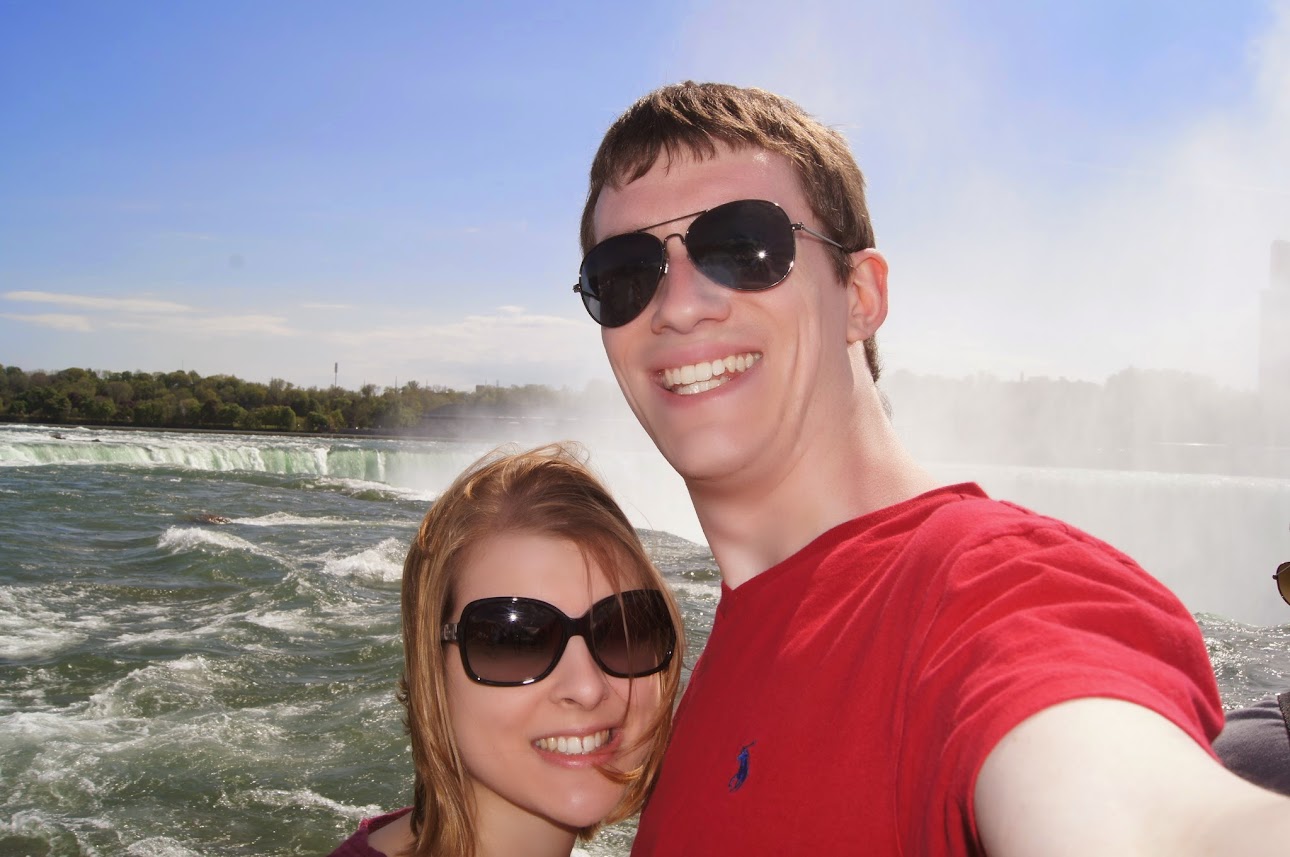 We actually took this selfie with the DSLR. Must have looked funny!

Believe it or not on May 24th, a bright and sunny Saturday, there was still some snow above the Horseshoe Falls!

By the time we made it back to the hotel, our feet were tired and stomachs were growling. Using our  internet referral method, we decided to walk over and pick up pizza at a highly rated place called Donatello’s. We split two personal size pizzas, one traditional pepperoni and one broccoli. The pizza was pretty good, not exactly the most amazing ever as the reviews described, but the owner of the shop and the girl at the counter were very nice, just like the reviews said. We took the pizza back to our room, happily chowed down, while resting our feet and watching a little TV.

Once we were sufficiently rested, we walked back across the street to spin away some more promotional credit at the slot machines. We both had $15 worth of credit and walked out with a combined $24.20.

I keep mentioning that we walked nearly everywhere. It was a beautiful day and walking was much less frustrating than driving and ended up saving us a lot of time, letting us see more in one day. We put some miles on our sneakers though! According to my FitBit, we walked just shy of 10 miles.

Breakfast was a repeat of Saturday, afterward we took one last spin at the casino with the rest of our credit. Another $15 per person put into the machines and we walked out with $20.45 and a feeling of accomplishment.

We checked out of the Sheraton, and said goodbye to Niagara Falls.

Because it was Memorial Day weekend, Sunday was the busiest day in the area and we were happy to clear out and have a day at home to relax and grill out.

Where do you like to go for a long weekend or inexpensive getaway?