It’s nothing like a karate chop but it is pretty brutal sometimes.

You see, when Brad and I started talking about getting married (way long ago before he even proposed) I decided that I should start growing out my painfully fine hair so someday I could have material for a stunning wedding ‘do.

Well I got my hair as long as it has been (or ever will be probably) and had enough to style for the big day. 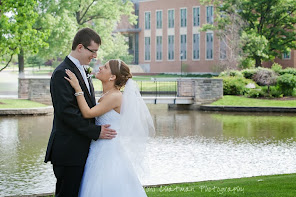 Fast-forward a few months from saying “I do” and wifey’s hair is still long, constantly shedding and fluctuating between two styles: ponytail and straightened.

I decided it was time for a change. (They say women change their hair after largely emotional events. That may be true…)

I did the wife chop. Armed with a picture I strolled into the salon with husband and mother in tow and asked for a should-length style. My stylist was apparently having a bad day or hearing problems. She cut off “six inches” of my hair… make that eight.

Which resulted in a shorter-than-planned style… that I kind of love.

Because he knew how hard I tried to grow out my hair and how long it took to get those eight inches that ended up on the salon floor.

4 thoughts on “The Wife Chop”