Jealousy is indeed a poor medium to secure love…

Last evening, Brad and I were sitting on the couch together and Holmes was purring away in his favorite spot. His favorite spot happens to be anywhere he can lay on, or be touching, every person in the house. In the case of last night, he was stretched out on Brad’s lap with his back feet on me. Watson had gone to their food and water dish and when he came back into the living room and saw Holmes, this is what happened:

Being the smaller of the two cats, whenever they get rough with each other, Watson puffs up his fur and triples the size of his tail. Sometimes the sideways walk comes out and last night it did. He took a few sideways steps across the living room, which prompted Holmes to abandon the humans and go sniff his brother.

The sniffing was reciprocated, followed by Watson fiercely licking Holmes’ face and returning to his normal size.

I’m definitely reading too much into cat behavior, but I wonder if they ever get jealous of each other. There are two of them and two of us. Most of the time it works out nicely: one human for each cat. Other times they try to both sit on the same person or they ignore us all together. Last night’s puffy cat moment, makes me think that they do get a little jealous.

… or at least a little crazy. 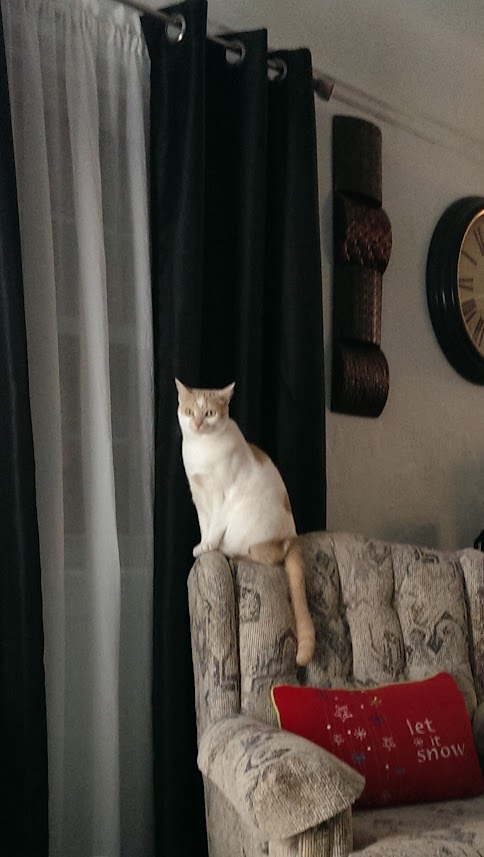 Of course voting is still open for Best Blog Awards, would you take a moment and cast your votes? My Tea Party Dress Refashion is nominated for a Best DIY Post Award. Thanks in advance!