In the E-family, I’m the ultimate “runt.” A nickname that my dad would occasionally call me. If my grandmother could introduce me to you, she would say, “This is my Little Bit.”

I can’t remember my grandmother calling me anything other than “Little Bit.”

There are a lot of things I want people to know about my grandmother, but it’s hard to put it all into a logical, organized post. The main thing that should be known about her is that she had a big heart, big in the way that there was room in her heart for everyone. She loved God, she loved her family, she loved her community and she loved animals.

My grandmother’s definition of family was incredible. Her family wasn’t just her husband and children… it was anyone who would let her be in their lives. I can remember as a child, I got upset once when another kid called my grandmother, “Grandma Jo.” I quickly learned that sharing my “grandma” with others would be much better than trying to keep her all to myself and only sharing her with the nine other grandchildren I biologically had to. Her love for me wouldn’t decrease a single bit as the number of people who called her “grandma” increased. Her love for them would do immeasurable good in their lives. Over the years, I heard comments about friends of her children feeling like they belonged in Mrs. E’s home, but it was clear the impact that she, and by some extension my dad, had on people when I heard people introduce themselves and someone who was”adopted” by the biological family that I’m proud to call mine.

My father was in many ways like my grandmother: loving and accepting of everyone. Not surprisingly, my dad came up more than a few times on Thursday and Friday. I needed to introduce myself to people as, “Don’s daughter” in order for them to understand how I was connected (who you belong to is kind of important in the town where my grandmother lived). I’m proud for people to know that I’m my father’s child, but it was a little rough to relive his loss in the same funeral home where his calling hours were held and again in his family church. It was in some ways like dealing with two losses at once.

Before going to the calling hours, Brad and I stopped at the cemetery to visit my dad’s grave. In the space between where my father and grandfather both lay to rest, there were pieces of wood covering the fresh grave where her body would be laid to rest near her husband and two sons. When my grandfather’s headstone was placed (in 1977), my grandmother’s name was put on it along with her birth date and a 19 for her death date. At the funeral, my uncle told a story about grandma saying in 1999 that she didn’t have long to live because of the 19 on her headstone. I remember her joking about that as well. But I’m personally very happy to have gotten 14 more years with her.

The first strangers who I met at her calling hours were talking with one of my uncles who had pointed out all of my grandmother’s living children and then introduced me, as “Donald’s daughter.” The lady smiled sweetly and looked around the room quickly before asking, “And where is Donald?”

It was on of those moments in time that only lasts for a second, but feels like hours. My uncle, to whom the question was probably posed, jumped to my rescue and explained that his youngest brother, my dad, had passed away two years ago.

A couple of weeks ago, the doctors said that grandma probably didn’t have much time so we drove across the state to visit her. She was in and out but when she was awake, we talked off an on. At one point, she looked at the crowd of family in the room and said to us, “You’re a good-looking bunch.” To which someone responded, “Most of us got it from you!”

As the day was winding down and her stats were improving, Brad and I decided to leave. Grandma said (for the 4th time since I’d been there), “I’m going to go to sleep now, so you can go home.” I took that as permission to do just that and she drifted off. I said goodbye to my brother and as I was turning to leave, grandma awoke and  asked where I was going. I let her know that I needed to go home and would need to say goodbye. “Okay. I love you, bye, bye.” I told her I loved her back, kissed her and left.

I’m so thankful for the opportunity to spend some time with her, have a conversation and actually be able to say goodbye. 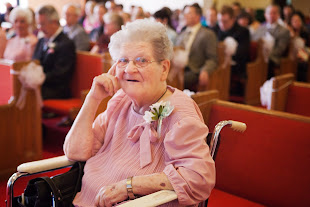 Grandma at my wedding

Thursday and Friday were my grandmother’s Going Home Party. She loved others and was loved by many.

2 thoughts on “Her Little Bit”