What happens when two Gilmore Girls fans, who happen to work in marketing, go the Luke’s Diner (Pour Cleveland)?

They evaluate the event of course.

My friend from college, Kaitlin, and I walked over to Pour Cleveland yesterday for Netflix’s Luke’s Diner pop up. Netflix worked with 250 coffee shops around the country to “turn them into” Luke’s Diner for the morning. Ohio had seven locations and here in Cleveland we had three. 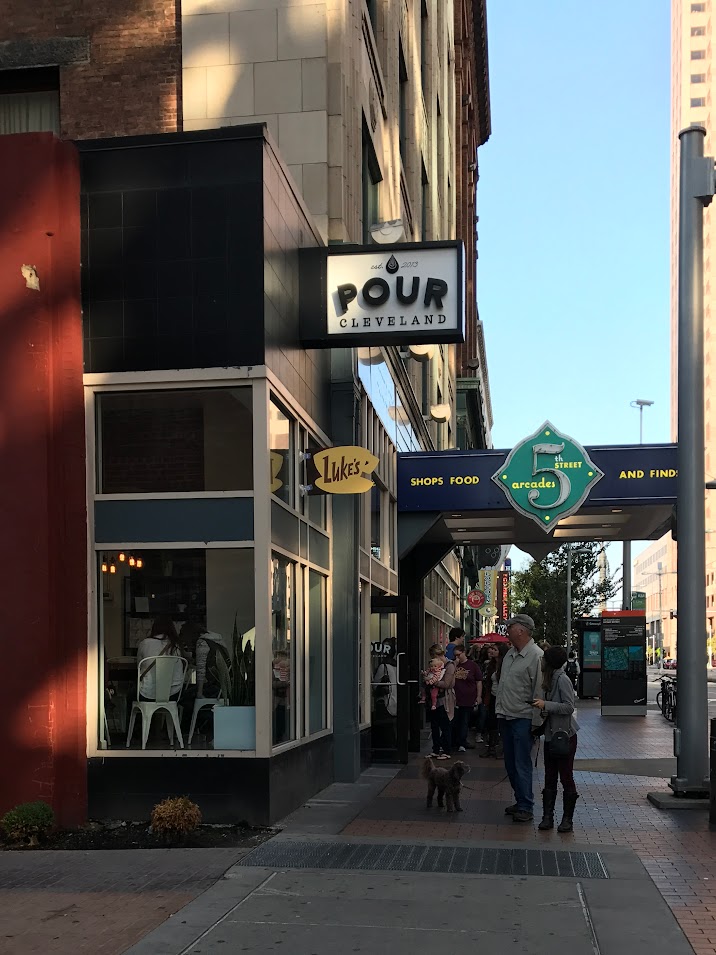 When Kaitlin and I arrived at 9:45 a.m., the line was down Euclid Ave, stretching across the entrances to the 5th Street Arcades.

The event started at 7:00 a.m. and they gave free coffee to the first 200 people. We decided that we’d rather pay for our coffee and skip a little of the madness. By 11:20 we were in the door of Pour. Not the longest line I’ve ever waited in, but not the shortest either. People walking by were asking us if the coffee was really that good or if they were giving away free stuff. A few even called us crazy. 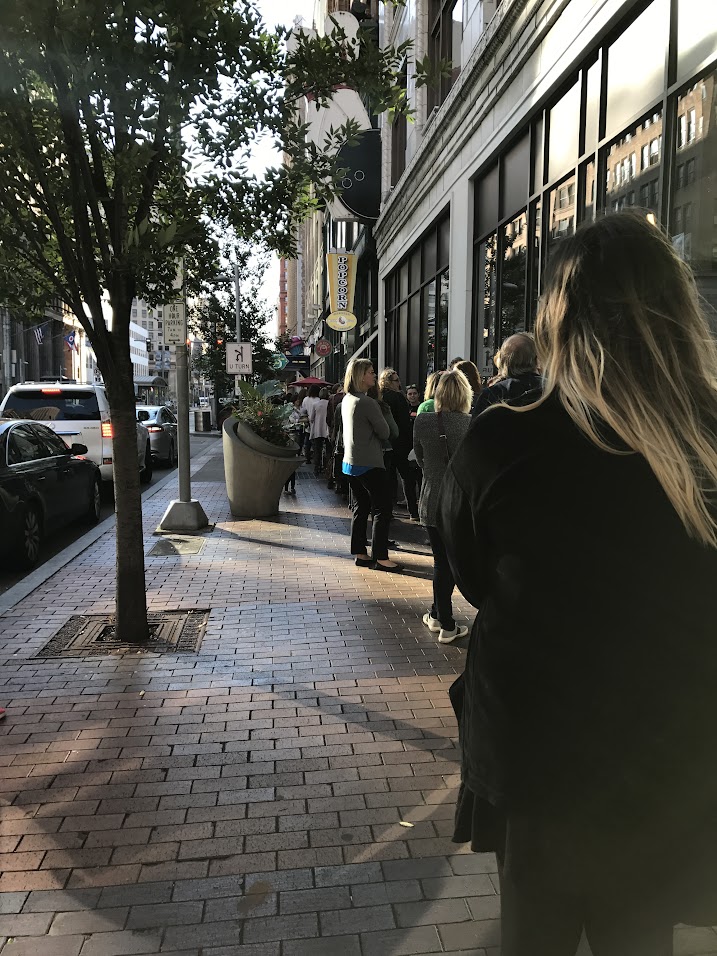 There was a Luke’s sign hung on the window under Pour’s own sign, a sign behind the register stating No Cellphones, the employees were clad in flannel, backwards baseball caps and Luke’s aprons.

The tip jars were a Team Dean vs. Team Jess competition. The lady behind us in line was disappointed there wasn’t a Team Logan container. We discussed the fact that Kaitlin is “Team New Guy” for the reboot and I feel like I’m “Team Marty” which isn’t even an option. Regardless, we voted for Team Jess. Not because he was already winning, but when giving that choice, he’s the better option. (Also, I’ve been liking This is Us lately that Milo Ventimiglia is in.) 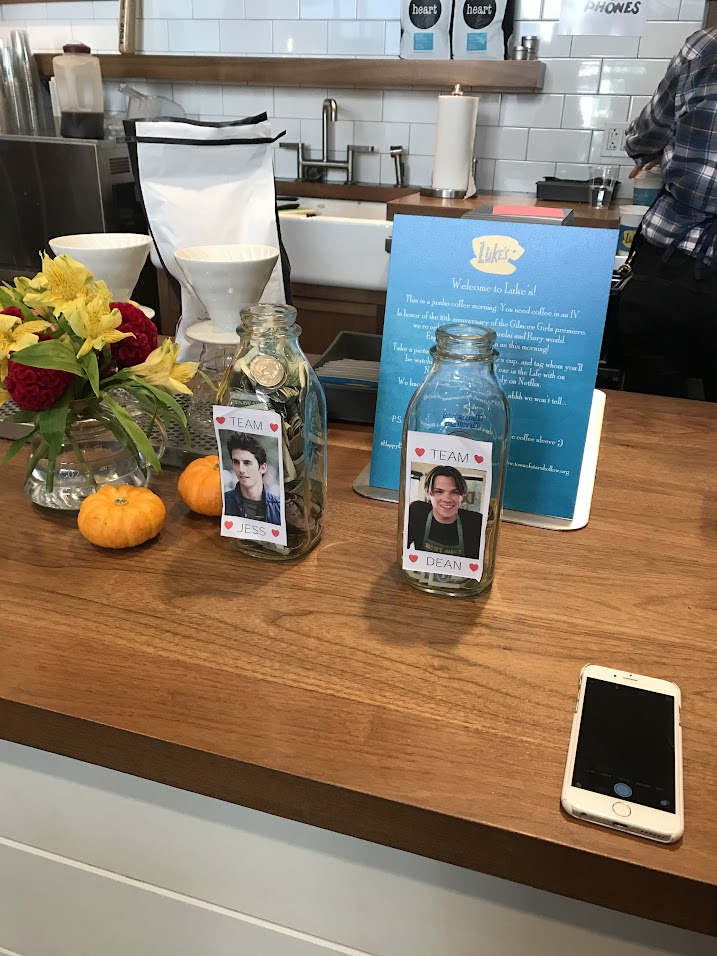 We got out coffee in Luke’s cups. It was fancy coffee actually, not sure Luke would approve. But no one judged me too harshly for ordering a decaf.

Kaitlin and I had a pleasant wait catching up, talking about the show, comparing marketing notes and speculating about the event process and strategy. We asked the employee when we ordered how Pour was selected for the event, but she didn’t know. 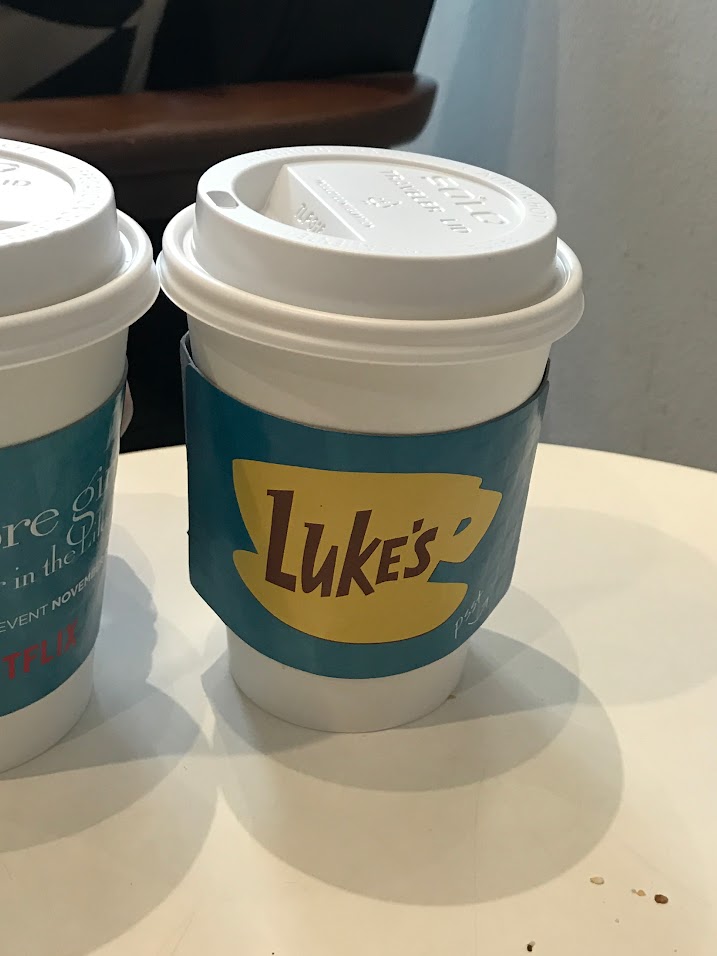 We left with Luke’s cups in hands and evaluated the experience. Kaitlin put it well that the event was underwhelming. 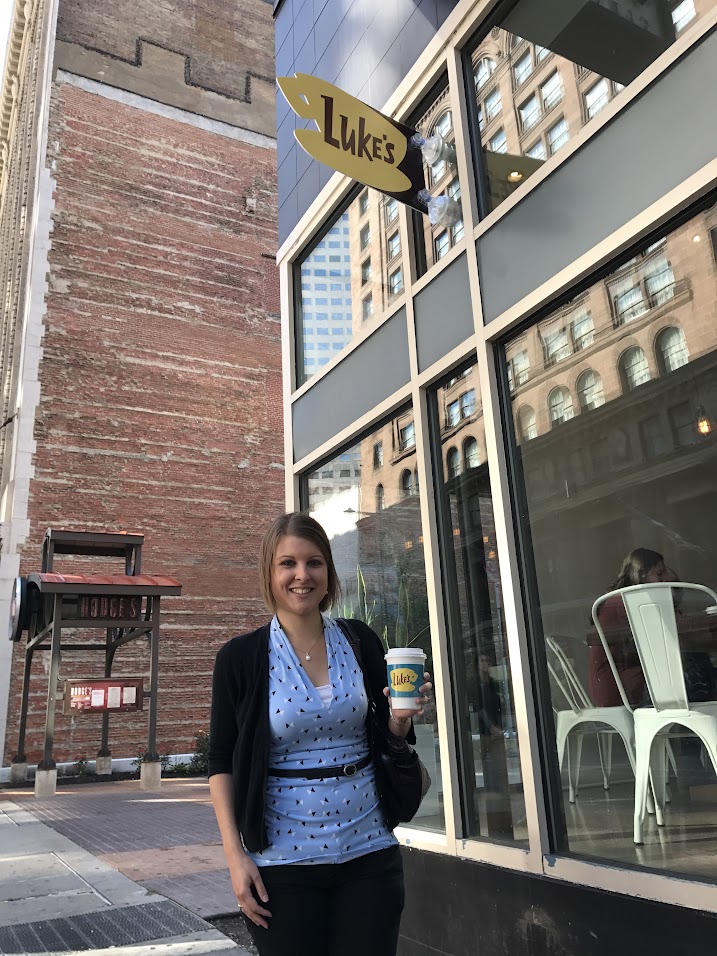 Although it seemed like a good turn out and it was well promoted, there was more that could have been done. Starting with the line. If the two of us were engineering the experience, we would have made arrangements for the line all day (I have no idea what the early morning was like). That included selling merchandise, chatting with Stars Hollow residents and/or listening to music from a town troubadour.

The diner could have been more diner like too. I realize that it would take a lot to turn 200+ completely different coffee shops into a model of Luke’s, but for Pour it wouldn’t have taken much to bring in some of Luke’s curtains and a table that looks like Rory and Lorelai’s. “But Rachel, that would be expensive!” Yes, I know it would cost money. But here’s the thing, there was not one single piece of merchandise for sale. Not a t-shirt, not even a bumper sticker! Sure, you can go online and buy a Luke’s shirt, coffee mug and other show swag, but even as a fan I wouldn’t go online and buy a shirt. If I could have bought one at the event that I attended, I totally would have! I have a feeling it would have balanced out.

There were definitely things that could have been done to improve the experience. At least the experience that I had at the one location that I went to. But all in all I commend Netflix for making this happen and bringing a little Stars Hollow to cities across the country. Check out townofstarshollow.org for more Gilmore Girls fun and stay tuned for Gilmore Girls: A Year in the Life, a four-part series coming to Netflix on November 25th.

Did you visit a Luke’s in your area? What did you think?

In case you were wondering, I’m not being compensated to write this post or promote the Netflix series. I paid for my own coffee.

One thought on “Coffee At Luke’s”