… and I ended up having a conversation with a stranger about OmniPods.

On Friday, it was the perfect story of being in the right place at the right time with string of events that when I stopped to think about it were pretty darn amazing. To tell you the story of Friday, I must first back up to Wednesday, when Brad and I went grocery shopping.

Knowing that Brad’s younger brother was coming for the weekend, we went to the store with a list in order to have actual food in the house. Weekend meals are usually just using up what is in the fridge and I go to the store on Mondays. Our list had walnuts on it because I had some bananas in the freezer waiting to become banana nut bread. But when we got home from our Wednesday shopping trip, I realized that I had forgotten to buy the nuts. I told Brad that I would stop either Thursday of Friday to get some so we’d have banana nut bread over the weekend.

I didn’t make it to the store until Friday. I left work just a little bit early and stopped at the first of three grocery stores that I pass on my way home. I didn’t see walnuts in the typical place at the front of the store, so I walked back to produce and didn’t see them so I thought I’d check the baking aisle even though it was unlikely that I’d find them there. I was right. No nuts. Deciding that I would just make banana bread, I started walking across the front of the store, along the entrances to the checkout lanes, to leave.

A woman at the end of one of the lines looked at me, made eye contact and said, “Excuse me…” I realize that she was talking me me and thought maybe she wanted me to grab her someone from the end cap near me so she wouldn’t lose her place in line.

“Yes?” I asked. And this is the rough approximation of the conversation that followed. 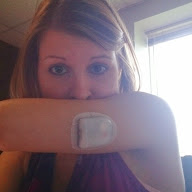 “Excuse me, I’m sorry, but is that an OmniPod?” she asked a little hesitantly.

“Yes it is,” I smiled and turned my arm toward her so she could see my pod a little better.

“I just got my starter kit for OmniPod and I train on it tomorrow,” she told me. “Can I asked you some questions about it?”

I was thrilled to chat with her about my pod. She explained that she recently decided to switch from her current pump to the OmniPod, but wasn’t sure how certain things worked, like filling the pod and starting a bolus. We talked about the start up process she was going to experience the next day, I bent my arm awkwardly to show her the window and the canuala, I showed her the PDM and the indicators on it, and told her about the fact the OmniPods will remind her when the pod needs changed and how long a pod will stay active after it has “expired.” Finally we talked about it being waterproof and the advantages when it comes to clothing and pods. I recommended that if she had more questions like what she was asking me once she gets started to look for other pod users online and told her about the Facebook group for OmniPod users that I just joined last week.

She thanked me for letting her ask questions and I wished her good luck with training.

“Thanks again,” she said. “Enjoy your shopping.”

“Thanks, unfortunately they don’t have what I need,” I said unnecessarily.

“What are you looking for?” she asked.

When I told her that I was looking for walnuts, she told me that they were tucked away in the fruit section and where I could find them. I thanked her and walked to the corner of the store to find the walnuts… exactly where she said they would be!

When I relayed the story to Brad and her brother when I got home, Brad asked me why I didn’t give her my card or tell her about my blog… or even why I didn’t tell her my name (even though she probably saw it’s Rachel from my PDM welcome screen). I told him about directing her to the Facebook group and that I probably should have given her a card, but I thought it might be awkward to do so.

If for some reason you’re reading this post and you’re the lady who I spoke with at the grocery store, I hope your training went well and that you like your OmniPod as much as I like mine. I definitely enjoyed talking to you and hope that I was helpful. And thanks for directing me to the walnuts!

I made banana NUT bread on Friday night and it was delicious.