As my workday is wrapping up, I start thinking about our evening meal. I don’t have the option  of starting dinner at 2:30 in the afternoon (that apparently some of my Facebook friends do)… If it’s not in the crock pot at 7:30am, dinner won’t be started until about 6.

I was fishing for ideas for that evening’s meal (I often fail at advanced meal planning and continuously try to do better). It’s about that point that Twitter tried to kill me!

Four people tweeted me back. Three people answered with some sort of seafood.

But seriously, the people who responded to me are way together and prepared. Why can’t I be like that?

I already know what’s for dinner tonight at least!

Clean Out the Fridge: Salads 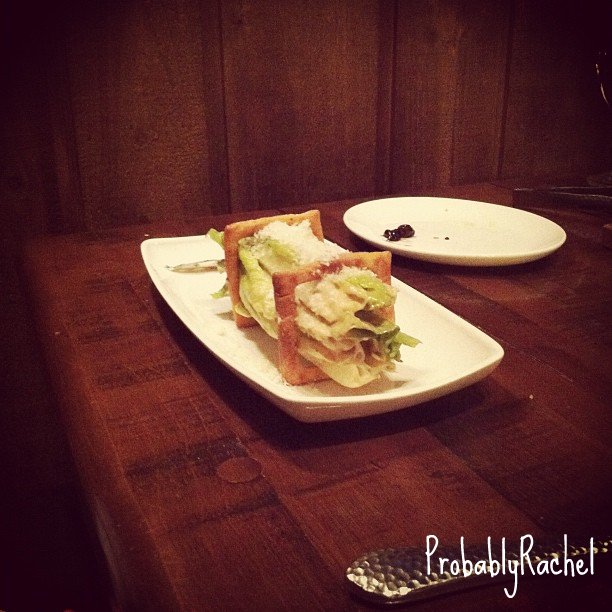 A salad. But not the one I’m talking about.

END_OF_DOCUMENT_TOKEN_TO_BE_REPLACED

I hope that you had an enjoyable and relaxing Thanksgiving and (hopefully) a long weekend!

Brad and I had two enjoyable Thanksgivings, neither of which we hosted.Some of the highlights included: Brad’s uncle pocket-dialed the non-emergency police department number, so the police called back. My favorite two-year-old spent part of dinner under the table. Families are great.

We ended up with Thanksgiving feast leftovers from both. Although Thanksgiving dinner was delicious, it’s not something we wanted to eat over and over until the leftovers were gone. Black Friday isn’t just a big day for retailers, it’s a big day for pizza places because there are a lot of other people who feel the same way.

What to do with the leftovers though? Some ideas straight out of the K-couple kitchen are:

Those three mostly used up our leftovers. We had a random food meal to use some of the other things, like chestnut stuffing. Some other leftover recipes I’ve seen/used include potato pancakes, stuffed pancakes (with cranberry sauce of course).

A lot of cranberries!

How do you reuse leftovers and avoid throwing out good food? END_OF_DOCUMENT_TOKEN_TO_BE_REPLACED