As this year wraps up, I’d like to share with you some of my top moments and posts.

Without further rambling, here are my top 10 blogs from 2013: END_OF_DOCUMENT_TOKEN_TO_BE_REPLACED

(aka: Do what everyone wants to do while not actually doing anything.)

As a communications professional, social media enthusiast and blogger, I know that many have the goal of going “viral” and getting their name and content plastered all over the internet, being discussed in coffee shops and at water coolers all over the world.

Everyone wants to go viral, but there’s no way to make your own content go viral. The virality of a blog post, video, picture, meme, whatever is up to the jury of the social public… and in the case of my own viral blog post, the media.

Here’s my story about going viral:

Nearly a year ago, I wrote a blog post about why people should take their shoes off in my home. It was infused with exasperation, sarcasm, fact, humor and a little bit of science. Shortly after writing the post, I got a few comments and one site reblogged it and that was the end of it. The post faded into the ProbablyRachel.com archives for many months. In fact, I had sort of forgotten about it. (I’ve published 453 posts on Probably Rachel along with numerous posts when I was a wedding blogger, several posts on my company blog and client blogs and a few guest posts… after awhile you don’t remember every single piece your write!)

A couple of months ago, I found out that an editor was doing a holiday story on the little shoes-on vs. shoes-off debate and was looking for some input. I sent her some answers and remembered the blog post when I was writing them, so I sent her a link as a little more explanation of what I was saying. A few weeks went by and I heard nothing. Then she contacted me and we talked about the article. She liked my post and wanted to know if she could quote it. She also asked if I could take a picture of my mud room.

The day that the AP released the story, I saw a big spike in blog traffic. That evening while Brad and I were out to dinner, I got an email asking if I would do a radio interview the next morning. I agreed and was on WBAL radio for about 1 minute that morning and they replayed my interview that evening. At the same time, an online news outlet decided not to reprint the story and instead talked about my specific blog post and linked to it, they claimed that it had gone viral.

At the time disagreed, simply based on the sharing and traffic. Sure there was a spike, but not viral by any means… after that article the post really did go viral. Large blogs shared the general story, a local news outlet shared the story but I think they intentionally left me out of it. I knew that I had gone viral when my friend saw the story posted on her cousin’s Facebook. A cousin who had no idea who I was!

Going viral comes about in many ways. For me the journey was this:

Write a funny post > forget about it > remember the post and use it as background for an interview > get quoted > interview on AM radio > have a news outlet across the country call you viral > actually go viral > get yelled at on the internet by a bitter old lady > then write a blog post about the experience > carry on with your life.

Brad keeps telling me to write a good blog post so I can go viral again next year. My dear husband has achieved viral status himself, quite some time ahead of me. A client snapped a picture of something at his desk and posted it to the internet and it spread more quickly than the flu. Things that go viral are typically not marketing messages. They’re usually good content of some sort, be it a funny sign at your desk or a list of reasons to take off your shoes.

By the way, congratulations to Jess who won my Level Foods bundle and thank you to everyone who entered!

I’m super excited to share the October Best of ‘Betes Blog Awards with you today! Reading all of the nominated posts made picking a little bit tough because all of the d-bloggers out there are amazing.

Without further ado, here are some of the best posts from around the diabetes community: END_OF_DOCUMENT_TOKEN_TO_BE_REPLACED

Before I tell you my news about Facebook, I need to tell you why today is special…

Today marks seven years that Brad and I have been the couple known as “Brad and Rachel.” More or less, it’s been seven years since Brad told me that we’re humans. 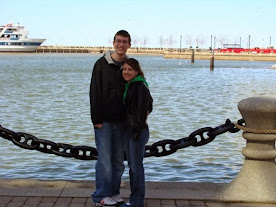 Us in Cleveland in 2008. Long before we knew we’d get married and move here.

We don’t celebrate our dating anniversary specifically anymore, but I feel that it’s important to acknowledge that our relationship started long before we got married. Because of the way our life together played out, we dated for a long time and were engaged for a long time before we actually tied the knot and just because we’re Mr. and Mrs. now those years shouldn’t be forgotten.

It’s kind of a policy of mine to only be Facebook friends with people who I really know offline. Although I consider many people from the internet my friends, it’s just a personal preference.

After connecting with many blogs on Facebook and seeing how people connect with bloggers on that platform, I’ve decided that it’s about time that ProbablyRachel.com had its own Facebook page. END_OF_DOCUMENT_TOKEN_TO_BE_REPLACED

Here’s a link to the info, category list and a history of the Best of ‘Betes Awards: http://momentsofwonderful.com/best-of-the-betes-blogs/a-history-of-best-of-the-betes-blogs/ One NEW thing that’s being tested out this month are Commenter Shout Outs. If you have received amazing comments on your blog from someone or have seen amazing comments around the DOC, shout those people out. You can submit them for a shout out by sending them in like a nomination, Submit that person’s name and link to that person’s blog, Twitter, etc. if you can.  Here’s an example of a shout out submission that I might send:

The blog posts that get nominated each month are awesome, but so are the conversations that are generated in the comment sections by other people, even if they don’t blog. The idea of comment shout outs isn’t to drive traffic back to your own blog post, but to recognize each person who strengthens the conversation. Need to nominate a great blog you’ve read? Go here. Need to find a great blog to nominate? Check out my blogroll, there are some fantastic writers there. I can’t wait to check out all of the nominations!

Here are some tidbits from this week: